Why can't Naruto go into Bijuu mode like the other Jinchuuriki?

Instead, he forms a transparent cloak in the size of the Bijuu, but doesn't get a full form like other Jinchuuriki. Even when fighting Pain , he went up to the 8th tail and got Kurama's real body in a sort of skinned form.

There have been a lot of incomplete answers. Let us try to combine what all we know. This will be spoiler heavy for those who haven't finished the Manga/Anime

TL;DR. When he first used Nine Tales Chakra he COULDN'T go into Bijuu mode. He could once Kurama agreed to work together.

Now to answer the completely DIFFERENT and Duplicate question. From Reading the comments. - Why do Kurama and Gyuki appear as chakra while other bijuu don't?
- Another theory is that Naruto's special seal devised by the 4th Hokage causes this. He used the Uzumaki techniques to create the seal. This is why he also appears in a similar Bijuu form as Naruto. Thus, this is a host specific form and NOT Jinchuriki specific. And yeah, Naruto is special. Reddit for this discussion. Contains Jiraiya's And B's comments on special nature of Naruto's seal

The answer is he can but chooses not to, instead he uses the six path sage mode which is the chakra coat and everything. in the movie Naruto the last, you can see that he summoned kurama to fight and draw symbols on the moon, this shows he can use kurama whenever he feels.

the direct quote from naruto wikia

Six Paths Sage Mode (六道仙人モード, Rikudō Sennin Mōdo) is a form which empowers the user's abilities to a far greater extent by utilising the Six Paths Sage Chakra. It is a divine state gifted by Hagoromo Ōtsutsuki to those who have an iron faith and the guts to never give up.the one consistent hallmark of Six Paths Sage Mode are Naruto's eyes: his eyes are yellow, his pupils are a cross of vertical fox-slits with horizontal toad-slats, and there is no pigmentation around his eyes that would otherwise signify standard Sage Mode. Naruto retains the ability to enter Tailed Beast Mode, which, in terms of strength, is comparable to Sasuke Uchiha's Complete Body — Susanoo, thanks to Six Paths Sage Chakra. Through the use of shadow clones, Naruto has shown the ability to combine three Kurama avatars into a single construct with three faces and six arms, which greatly resembles his ancestor Asura Ōtsutsuki's own chakra avatar.

I think you want to know why he don't look like the fox that attacked on konoha while lord 3rd and 4th fought him or etc. One answer for your question can be, kurama was never fully inside naruto's body. If you remember correctly half chakra of kurama was inside minato which he revealed in great ninja war(the yin half). This can be reason for naruto to never go in full bijuu form or to obtain a real physical body but just a cloak of chakra. Another reason i can say that kyubi is strongest of all other beasts and his owner naruto is main character . So just to differentiate the power levels and keep main character and his beast separate from general crowd kishimoto might designed him to look that way only. :P hope this helps!

He can go to the bijuu mode. Just take a look at this screenshot from episode 392 (The Hidden Heart): 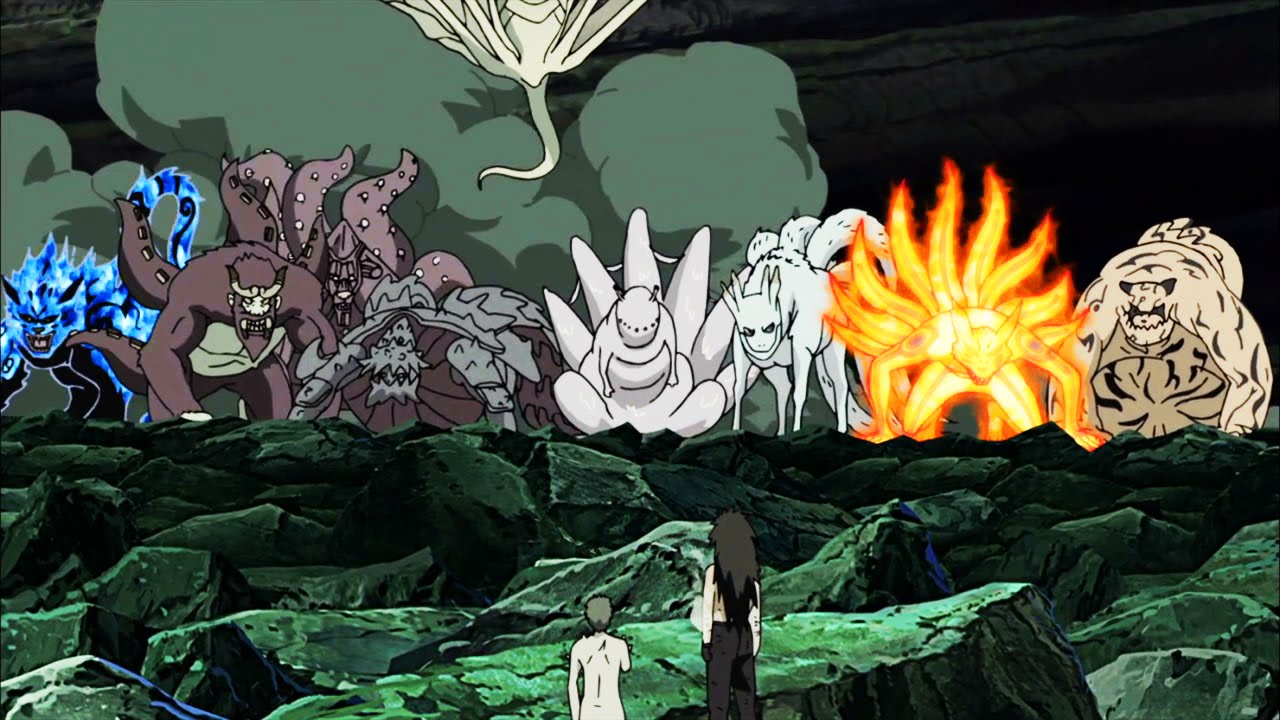 However, cloak mode is a lot more convenient if you want to dodge attacks, go inside a cave, or do delicate tasks.

Either way, I don't believe yin or yang have anything to do with a full on physical transformation for Kurama. Yes in two movies Naruto DID do a full on transformation into physical nine tails form but then again they are movies and really don't fill into the show since the show itself never brings up things that happen in movies or retain what they learn from them.

Back to the point! Naruto/Kurama have gone physical nine tail form in the Pain fight when Naruto was stuck in planetary devastation, as you see in Yamato's hand during that part Naruto was in stage nine. Even with just Yang side of Kurama and also without sage of six paths mode. Basically we only see full on physical nine tails Kurama (just skinned) ONCE in the whole series but never again. Still nothing explains on why Naruto can't just go physical nine tails mode again like the other jinchuuriki could or why he uses a chakra based form instead.

It's probably because half of the 9 tails is in minato. Anyhow in the last movie naruto used the power of the nine tails completely instead of using a chakra cloak. That may be because either he took the other half or just because the movie was a non canon. The other answer can be that naruto can go to either mode whenever he wants to. Hope this helps :)

I believe it's because Naruto only has half of Kuramas chakara, Miniato couldn't do it as well, unlike the rest of the Jinchuurikis they carry both halves of the Jinchuuriki and it's chakara therefore they can transform into jinchuuriki itself and not a cloak.

However, in the battle against Madara Uchiha and the Ten-Tails, he ALMOST made it to full Bijuu mode.

9
Can Naruto go into Sage Mode repeatedly by using idle shadow clones?
8
Why do Kurama and Gyuki appear as chakra while other bijuu don't?
7
How was Nagato able to re-awaken and control the Rinnegan?
5
Why didn't Minato make himself also the Yin-Kurama jinchuuriki?
1
In Naruto, why were women chosen to be Jinchuuriki of the Kyuubi?
1
What's the background music playing on Naruto Shippuden episode 329 when Naruto meets all other jinchuuriki?
3
Why Shizune's body didn't turn into red like the Orochimaru's hand turned?
0
In which episode did Naruto turn into Eight-Tails Chakra Mode while fighting Pain?