What's up with the huge iron in FLCL?

I think FLCL was a lot of fun, but I also found it really hard to follow sometimes. For instance, what's up with the huge iron? It's big, and it ejects steam at least once in the series, and it probably comes from aliens. But why is it there? What is it for? 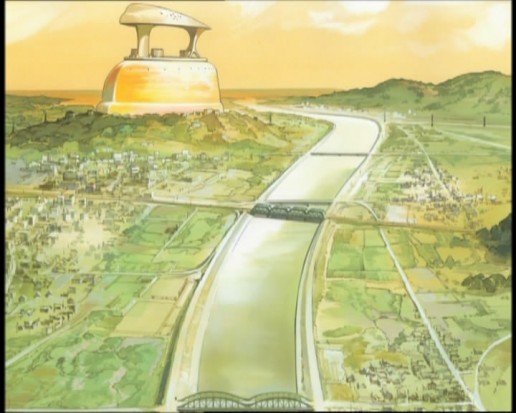 The iron is the Medical Mechanica plant. They plop their factories down on every planet that they come across. Their reason for landing on a planet is to conquer it by "smoothing out the wrinkles."

It is debated in episode 6 exactly what "smoothing" means... Kitsurubami analogizes it to the smoothing of the wrinkles in the brain. It's later revealed that Medical Mechanica smooths out an entire planet so that everyone is the homogenous -- meaning there would be no unique personalities, like Haruko.

The primary idea of the iron is that it smooths out wrinkles. Toward the end of the series it is revealed the Medical Mechanica is responsible to smoothing out entire worlds, thus rendering them for all intents and reasons Unable to think for themselves.

Medical Mechanica is an evil corporation in the anime series FLCL. They mass produce "medical" robots, which tend to be very violent. Their buildings are shaped like irons, and release steam at certain parts of the day. There are no entrances or exits to these buildings, so how people get in and out is a mystery. One character describes the strange steam as them "Ironing out the wrinkles in your brain so you can't think." Medical Mechanica also captures an intergalactic space pirate "Atomsk", who one of the main characters has been searching for. Though it is never really explained how, or why. Little is known about Medical Mechanica, and it is implied that they are somehow connected to the government.

The above quote can be found here: Medical Mechanica Villains Wikia Page

Not the answer you're looking for? Browse other questions tagged flcl .