Why Is Britannia often depicted as an almighty power?

Often in series revolving around wars, you will see a mention of Britannia. More often so, they are depicted as an almighty power which is to be feared, or even one which has dominated most or all of the world.

Some of the most known examples would be code-geass where "The Holy Empire of Britannia" conquered most of the world, including Japan, which then became known as Area 11. Or a bit more obscure reference in nanatsu-no-taizai: 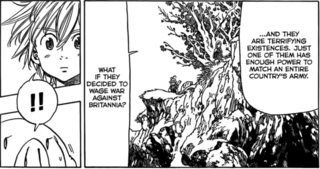 So why is Britannia often depicted as an almighty power? One who should be feared?

Based on your comments you seem to be drawing too much of a distinction between the words Britannia and Britain, as in fact both mean the same thing. Britannia is just the Latin (and ancient Greek) word for Britain. While there was no Empire of Britannia (or Holy Empire of Britannia for that matter), strictly speaking there was also no British Empire. That is just the informal name for what, at its height, was more accurately called the United Kingdom of Great Britain and Ireland and the various dominions, territories, protectorates and so on that it controlled.

So if you take the historical, but informal British Empire, and alter history by turning it into a real empire with a real Emperor/Empress and give it a more fanciful name by merging the name of historical Holy Roman Empire with the Latin name Britannia and you get what see in Code Geass. The name "Holy Britannian Empire" both invokes the might and culture of the British Empire while also clearly being something else entirely. Similarly, I'd expect any other reference to Britannia as a real country in anime and manga as meant to invoke Britain, but not actually be Britain.

Mind you can't find much evidence that Britannia, as distinct from Britain, being a trope in anime and manga. The two series you mentioned, Code Geass and The Seven Deadly Sins, are the only ones I can find that have a "Britannia". In the later series, it also doesn't appear that Britannia exists as a political entity, just a name for the region where the story is set.

Indeed, I'd say Code Geass is actually an example of the America Takes Over the World trope, as, despite the name, the Holy Britannian Empire is centred in America and doesn't actually control Britain.

Actually Brittania is Britain in both instances with the The Seven Deadly Sins version even showing a map which is just a copy of real word Britain nowadays, In Code Geass'es sense Britain owned a majority of the world around 100-200 years ago, It was the only superpower around as it owned India, Africa, And even America what everyone forgets is America was just a British colony the lands found by British sailors.

7
Why are the male love-interests of shoujo often portrayed to be top scorers?
28
Why do characters often pull down one eyelid and stick out their tongue?
21
Why are the seven deadly sins used so often in anime?
6
Why do sick anime characters often are said to have a "weak body"?
26
Why do guys in anime often lack nipples?
1
What is the meaning behind dark works often taking place at midnight?
6
Why do anime mothers often get the short end of the stick?
6
Why are old anime women often depicted as young girls?
7
Why is Kaguya depicted with a flower growing out of her head when in her moron/fool form?