How did the sweatdrop originate?

I can kind of handwave or fanwank the origin of things like the exasperated faceplant or the vein popping out when a character is comedic-angry, and even the trope of Japanese flag fans coming out when people want to cheer on their comrades, but how did the sweatdrop come to characterize the feeling of sort of embarrassed contrition? 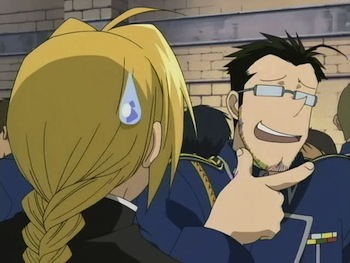 I can't come up with anything logical just based on speculation. Is this an outgrowth of the manzai tradition, with the tsukkomi and boke characters?

There doesn't seem to be any "official" announcement for that, but I think it's safe to say that since Manga and Anime make heavy use of symbols to re-create a concept or a situation, the sweatdrop functions the same way. In other words sweatdrop (see image below) is a reference to the fact that when people feel uneasy or feel similar emotions, they usually get sweaty. You don't get that sweaty in real life, but again, they're symbols.

And so on. There is more (as a start) on the Wikipedia page for Manga Iconography.

I always like to know WHEN and WHERE something originated before answering how.

That said, I asked this very same question in the late 90's and was told that it came from older video games with characters that were so small in size that they couldn't do any facial expressions with them.

It sounded reasonable to me, because I can't think of any animes in the 80's using this trope, but doing a little bit of backtracking I can't find any early video games using sweat drops either.

I do know the September 1995 Sailormoon RPG has it, but that's too now compared to manga and anime examples.

The oldest anime example I now know of is (yet again) Sailormoon, right off the bat from the first episode, March 1992.

The oldest manga example is Sailor V, right from the start again, thus making this trope start back at at least August 1991.

However, the vein popping trope, also present in Sailor V 2nd volume is older, being at least as old as Super Mario World which was released in November 1990.