What does the third eye of the Sage of the Six Paths do?

The Sage of the Six Paths had Rinnegan in both in his eyes. He also awakened a third eye on his forehead. 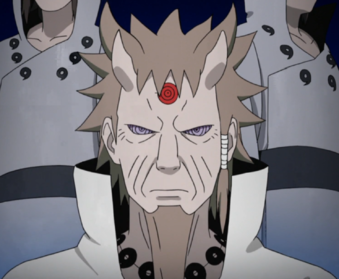 Is that a Sharingan of some kind?

What powers does that third eye grant it's wielder?

After awakening his Rinnegan, he also manifested a red circle marking with two ripples patterns in the centre of his forehead, seemingly a byproduct of his ultimate dōjutsu manifested alongside his senjutsu training.

It references episode 426 of Naruto Shippuden and suggests it wasn't a true eye but rather a marking. There's no way to be sure if it gave him any special powers, but all

abilities he exhibited were in line with what we know was possible via his Rinnegan / Mangekyo / Senjutsu abilities so it doesn't seem to have given him anything.

Additionally it's flat and lacks the depth that Kaguya's third eye had, also suggesting it was simply a marking. The best theory I can come up with is that it was an incomplete manifestation of Kaguya's third eye.

Actually, that marking is the Mangekyo Sharingan. When Hagoromo and Hamura (both sons of Kaguya Otsutsuki) fight Kaguya, Hagoromo has to kill his brother for he was under the control of Kaguya. But thanks to Gamamaru (presently the great toad sage), Hamura was saved by sage power.

In all, the red mark probably represents the Mangekyo Sharingan in order to show that Hagaromo has both the power of the Sharingan and the Rinnegan.

Couple of things it does. Number 1 it has the Chakra that worth ten tails which is Canon and if that's not enough proof madra absorbs ten tails then he gets rinnesharrigan. The other thing it does it does is that it does the infinite tsukuyomi. The last thing it does it typically opens portal for transportation and sometimes in rare instances like kaguya has unique abilities like bringing people to dimension instantly or going through half the dimension like an open door.

9
What are the six paths?
16
How did the Sage of the Six Paths obtain his Rinnegan?
4
Symbols given by Sage of the Six Paths to Naruto and Sasuke Chapter 672
5
Do Naruto and Sasuke lose their powers after the final battle?
6
Why doesn't Naruto have/use his Six Paths power?
7
Why was it so easy to defeat Toneri, Kinshiki and Momoshiki?
1
Does Sasuke have only one Rinnegan eye because he only got half of Hagoromo's chakra?
1
Why doesn't the Sage of Six Paths undo the Infinite Tsukuyomi himself?