I'm having some trouble following the battle of the Akai squad vs Gauna 487 at the end of Knights of Sidonia episode 3 (which I am clearly overanalyzing). I've replayed the scene like five times and cannot figure out how or when Aoki is killed, and I can't follow Momose and Midorikawa's demise.

Something about the animation and visual similarity between characters (as well as similar voices for the men) is making it difficult for me. The only way I could really tell who was who was the unit numbers on their helmets (001: Akai, 002: Momose, 003: Aoki, 004: Midorikawa).

So from what I can tell (Netflix timestamps), I've bolded the parts that I wouldn't mind some clarification on:

The whole scene is a little eyebrow-raising because the mistakes they made and tactics they used didn't seem to agree with the build-up of their skill and confidence to this point (although on the other hand none of them had fought a Gauna before and maybe highlighting their break-down and the contrast with their hyped up skill here was the point). They went down pretty easily.

I admit I'm overthinking this (and at this point I've spent about 40 minutes dwelling on a 3 minute scene where the only thing that's really significant about it is that it's chaotic and everybody dies), but this is the culmination of my frustration so far at having a really hard time keeping track of who is who (doesn't help that there's like, clones everywhere; at least I assume they're clones - either that or the animators are really struggling to differentiate the characters).

Update: OK, so two new data points that make this even more confusing.

First of all I just noticed that we briefly, for like a half second at around 22:31, see Momose floating through space (interior shot, this happens right before we see Midorikawa's interior shot): 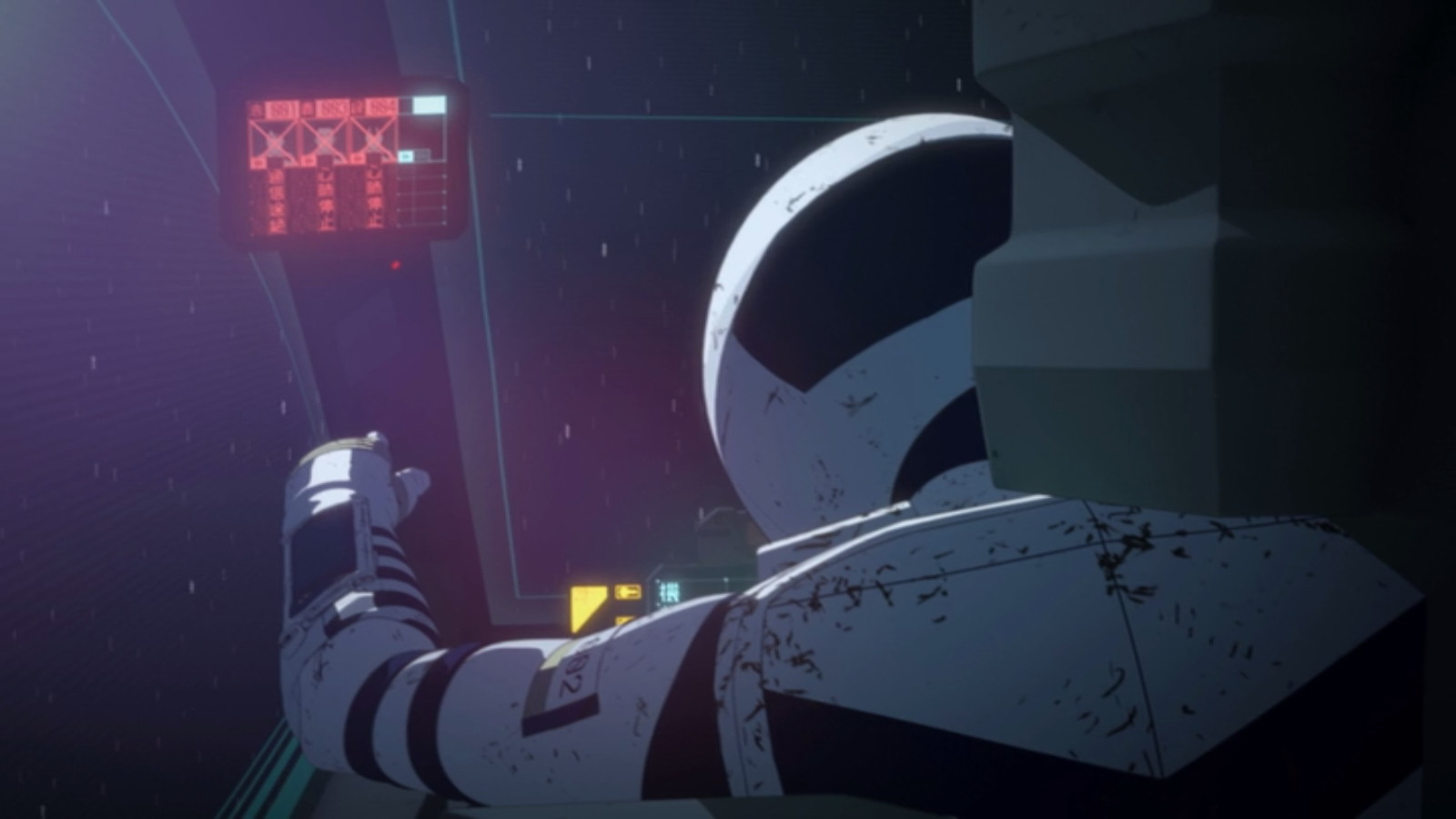 So now it seems clear that Aoki was the one that exploded (although how he got so close to Momose/Midorikawa I have no idea), until...

We see this map in the control room at the start of the next episode: 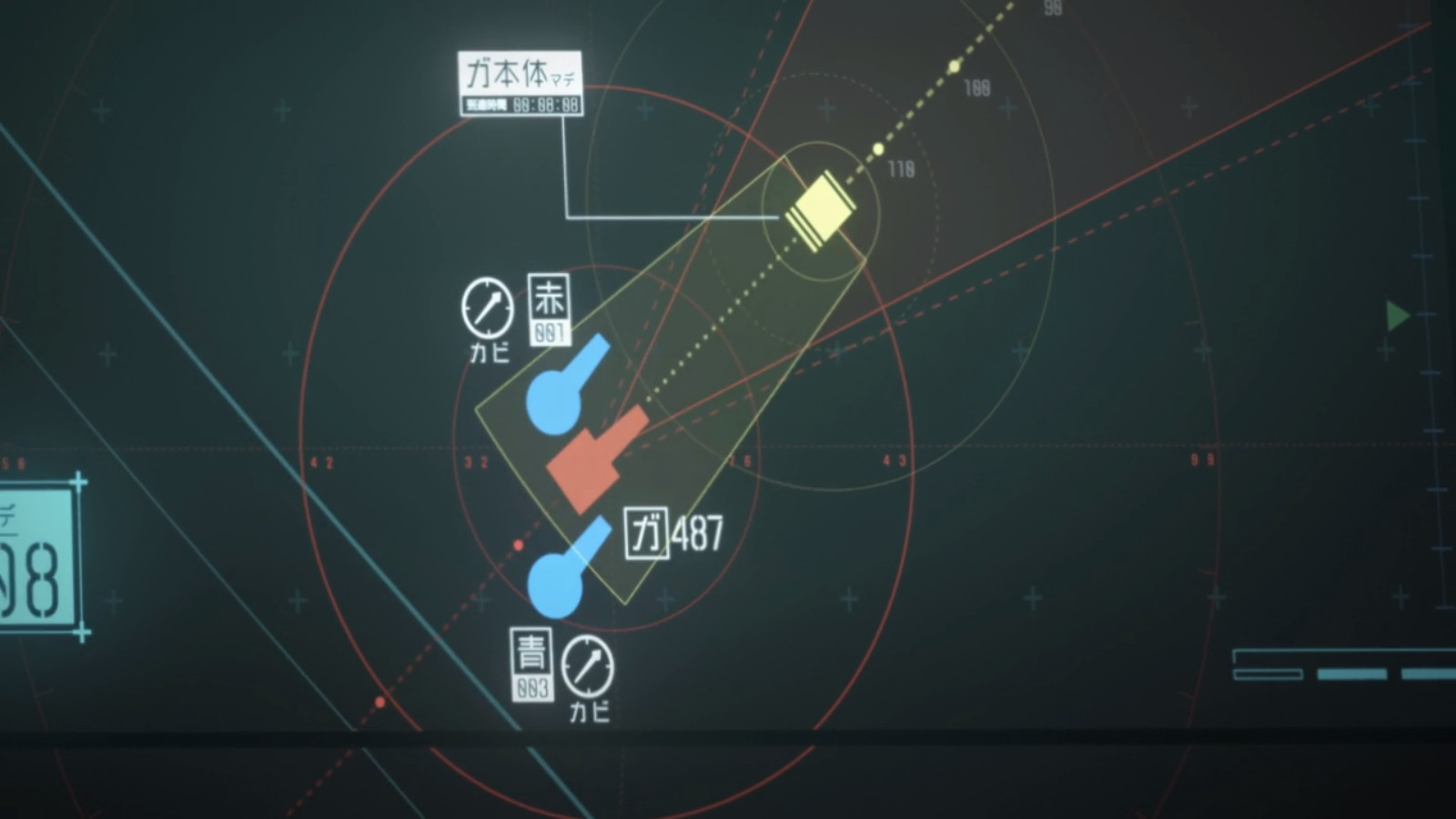 So that rules out Aoki exploding as well, which raises the question, what was that explosion at 22:25 in episode 3? Ahhh!

Episode 4 answers your question. Momose was captured by Gauna. Akai came to save her, cutting the tentacle. However, this exposes him to Gauna's attack, which pierced his Gardes, killing him. Akai know this, and the fact that he won't be able to avoid the attack, which is why he said sorry to Momose. The Gauna then holds Akai's Gardes with its tentacles.

Gardes no 3, Aoki, then assume command and hold the Kabizashi. The plan was for him to pierce the Gauna while no 4, Midorikawa, tear open the protective layers. What was going on when they were told to leave Momose was probably Aoki taking the floating Kabizashi left by Akai. Momose, however, came from behind the two and charged head on towards the Gauna, screaming towards the Gauna to let Akai go. The Gauna easily repelled Momose, slamming her gardes with its tentacle, causing her to go into cardiac arrest due to the shock.

Midorikawa went chasing after Momose who was thrown away. Because of this, Aoki turned his attention away from the Gauna. The Gauna used this to attack them. Aoki got killed by the Gauna. The tentacles then went after Midorikawa pierced his Gardes from behind, killing him. So Aoki was killed before Midorikawa.

When Akai's gardes was pierced, it didn't explode. As shown when Momose charged head in, the Gauna hold Gardes no 1 with its tentacles. Since Midorikawa died from the same cause, it can be assumed that his gardes too didn't explode.

As for the explosion, I'd say that it was not the sound of anyone exploding, it is just a sound effect before the ED song.

Not the answer you're looking for? Browse other questions tagged knights-of-sidonia .

6
Does Sidonia no Kishi's 256 frame formation have scientific advantages?