Where did Gary get these badges from?

In Episode 63 of the Pokémon anime, it can be seen that Gary has ten badges, seven of them unknown. 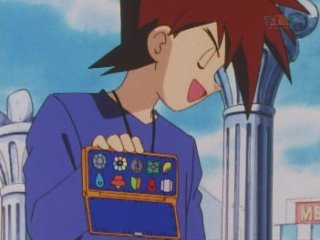 The known badges are Boulder Badge (top left), the Cascade Badge (bottom left), and the Rainbow Badge (next to the boulder badge).

Where are the other seven from? And why are there ten of them? Every conference needs eight badges, all of them from the same region.

Besides all the official gyms, there are also unofficial gyms. After beating those, you will also receive a badge. Therefore, I think that those badges were obtained in one or more of the unofficial gyms. The one just right from the top left looks somewhat like the Coal Badge from Sinnoh though.

Unofficial Gyms in the anime:

There were 15 gyms in the Kanto region, that is one gym for every type, minus Dark and Steel types. This means they were not featured in the anime/game to prevent confusion, but still are considered official gym's.

Anyways it would make sense that Ash only went for eight badges compared to a possible 15. Most of his badges in the first season were given to him without even finishing his gym leader battles plus the games only featured eight gyms so then changing it to a higher number in the anime might have been confusing for fans. Source

8
Where does Team Rocket get all of their vehicles and machines?
11
How does one start being a Pokemon Trainer without a Pokemon Professor?
8
Is it necessary for the Gym Leaders of a region to know each other?
13
Where did the phrase "Gotta catch 'em all" come from?
3
Why did Rayquaza get a mega evolution?
2
Where did Ash's Haunter go?
14
How many times did Brock get rejected by women?
1
Why was Ash's Pokedex replaced?