Were Luna and Artemis the only (sentient) cats in Sailor Moon?

In Sailor Moon, there are two cats, Luna and Artemis, who I believe act as advisers for Sailor Moon's mother, the queen. 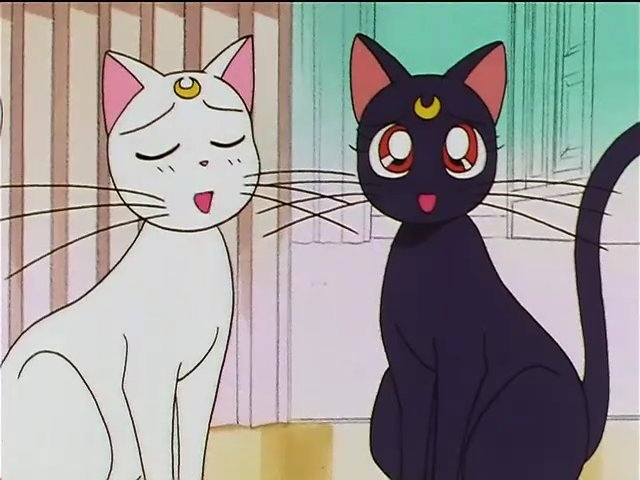 It's been a while since I've seen the anime, but were there any other sentient cats in Sailor Moon? Or were these two the only ones?

There is also Diana, who was born on Earth. She first appears in episode 126 or 133 (English and Japanese dub respectively) of the anime and is revealed to be the daughter of Artemis and Luna. In the manga, she first appears in Act 18. She comes from the future and so when Luma first sees her (in the anime) she is confused because Diana refers to Artemis as Daddy. She is the advisor to Chibiusa, as Artemis and Luna are Usagi's advisors.

Yes, Diana is Artemis and Luna's daughter, but she is not the only other sentient cat. In addition to this trio:

in the original manga, Luna and Artemis are natives of the cat-themed planet Mau, which is in the same galaxy but is outside of the solar system (how this aligns with the cats serving Queen Serenity in the Moon Kingdom is not explained; apparently Luna and Artemis immigrated to the Moon at some point). Mau is the same planet that Sailor Tin Nyanko comes from. Sailor Tin Nyanko was not originally a real sailor soldier according to manga canon; rather, she killed the planet's true sailor guardian, Sailor Mau, in order to gain synthetic soldier abilities. All sailor soldiers and other special beings who likewise possess true star seeds (such as Tuxedo Kamen, Luna, Artemis, and Diana), who died by having their true star seeds removed, after Chaos was defeated, received their star seeds back and came back to life. Thus, living on Mau at the end of the manga series, there are 1) a resurrected Sailor Mau (implied to be humanoid, simply on the basis that all sailor soldiers we've met have been humanoid, but since she was not specifically shown or described beyond her name, it is not impossible that Sailor Mau could be a sentient cat herself... especially considering that Luna, Artemis, and Diana each have a humanoid form that they can transform into), 2) other humanoids (like Tin Nyanko), and 3) the implication of other sentient cats as the regular residents of the planet Mau.

(Diana is the only sentient cat who is not a native of Mau, since she was born on Earth in the 30th-century Crystal Tokyo.)

(Note that the Sera Myu musicals follow the manga with Tin Nyanko as Sailor Mau's assassin, but the anime canon differs, in which Sailor Tin Nyanko is a true sailor soldier who was originally good but got brainwashed by Sailor Galaxia's bracelets, and there is no mention of Mau or of Luna and Artemis' further backstory.)

4
How much of the original Sailor Moon anime isn't from the manga?
6
How rare is it to find an anime script from the late 1990s for purchase?
6
Why can Sailor Pluto be away from the Space-Time Door?
2
Is there any in-universe reason why the Sailor Senshi aren't affected by the citywide energy drain?
1
Which episodes of Sailor Moon Crystal are Ittou Asanuma in?
4
After seeing Sailor Moon Crystal, will I miss anything by skipping the first two seasons of the original anime?
1
Why do the names of the Sankakusu sites match the surnames of Uranus, Neptune, and Pluto?
3
How was it possible for Sailor Moon to be referenced in Codename: Sailor V?