Why are only some of the references censored in Lucky Star

As anyone who has seen Lucky Star will remember, most of the references to other anime and manga are censored. The most obvious examples of this are references to Gundam or Sgt. Frog (both of which are notably Sunrise shows). Presumably this is done to avoid KyoAni getting sued. This also explains why references to Haruhi and Full Metal Panic weren't censored (as far as I remember). Interestingly these instances of censorship probably could have been removed in the English release since it was licensed by Bandai, but I don't know if they actually were, so this question might only apply to the Japanese version.

However, there are still a few cases of references which weren't censored despite no obvious connection between the Lucky Star team and the source. The one that immediately comes to mind is To Heart, which is referenced several times. To Heart is associated with VN studio Leaf as well as animation studios Oriental Light and Magic and AIC, neither of which have anything to do with Lucky Star (KyoAni and Kadokawa). I can't find any connections between them, but of course that could be oversight on my part, and I didn't check all of the individual staff members.

Is there some connection that I missed? Barring that, what sort of policy would a studio typically use for references like this? Would they try to obtain permission for all of the references, or just bleep the ones that seem risky to them?

Not sure if this is just a random connection or actually the reason, but here's the connection between Lucky Star and ToHeart:

Lucky Star's manga and anime are published by different branches of Kadokawa. The ToHeart manga was published by MediaWorks which was owned by, you guessed it, Kadokawa.

I don't know if every single branch of Kadokawa is allowed to mention a work in every other branch, but there is at least this connection. If someone bought Lucky Star DVDs and saw ToHeart mentioned and then decided to go buy the ToHeart manga, that's a double win for Kadokawa.

A major concern might be whether they has consent from the references' company.

An example would be Ore no Imouto ga Konna ni Kawaii Wake ga Nai, they show some vender's H-GAME cover in Kirino's H-Game pill, which have offended those companies and the production studio later apologized. (If I remember correctly)

I found something interested when investigating a recent news, I'm not sure it's relevant or not though)

A recent episode of Yuri Danshi in Japan was said to infringe the copyright of some manga. (Hidamari Sketch, A Channel, Golden Mosaic) 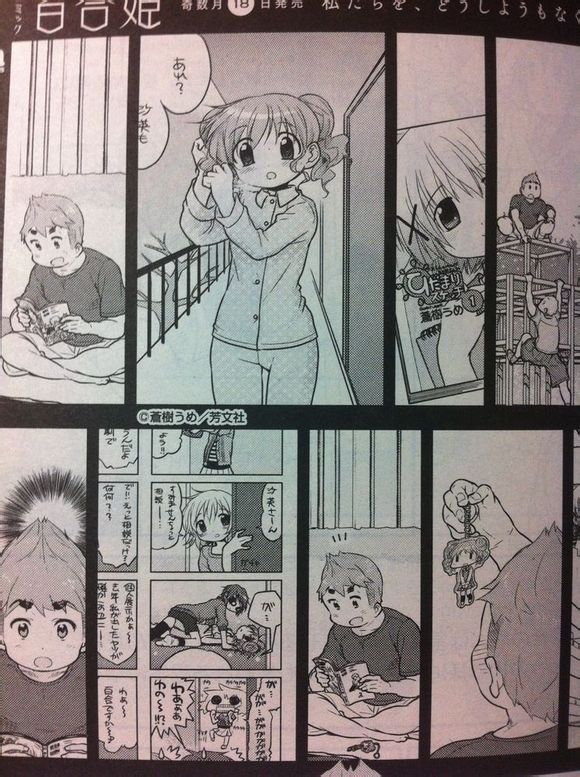 I thought this should be in the range of fair use (just like quoting sentences from another book), after checking "Fair use" the Japanese Wikipedia, it turns out "Fair use" doesn't exists in Japan's copyright laws. You must have consent from the author.

Mainly due to copyright reasons and the animes not belonging to the animation studio.

If they decided to un-blur them they would have to give copyright claim for all of them or get permission from other companies.

12
Who are these characters in the bookstore?
5
Why was Yamakan replaced by Takemoto as director of Lucky Star?