Fighting the Elric brothers in an early episode of the FMA: Brotherhood anime, Greed eventually hardens his entire body, making him impervious to damage aside from directly transmuting his armored skin.

Later in the show, Greed has multiple fights against foes that do not use alchemy, and thus he should have an enormous advantage over them. However, he never again hardens his entire body—he almost always armors his limbs, but his chest, neck and head always remain vulnerable—and these weak spots always end up exploited.

We see him use his full power again in episode 58 in a battle against some nameless mooks, right after a near-total defeat in an important duel where he only protected his arms.

Why does Greed never armor himself fully when it actually matters?

Recall that in the latter half of the series, Greed shares his body with Ling, his "host".

Greed is often forced to share control of his body as a result; his host is a far superior fighter against certain opponents later in the series. However, his host has no control over the hardening of the shield. So, Greed puts the shield on, then lets his host take over (since he is a superior warrior). Likely the reason Greed doesn't fully cover his host is that it will reduce his speed and agility. (When fighting the "nameless mooks", the advanced combat abilities are not needed, so Greed maintains full control.)

Related to the above point, later in the series, the shield may symbolize how much of the body Greed is actually controlling. Since Greed's host is usually in control in a fight, his face being composed of skin may represent this.

It's also worthy of note that parts of the body not covered by the shield are able to heal themselves.

And the last point is one of personality; Greed is cocky and vain, and likes people to see him as he is. Since his shield turns his face into something more robotic and toothed, he prefers not to use it.

Sorry to let you down, but I've been holding back. [The complete Ultimate Shield] obscures my handsome face, so I try not to wear it that much. 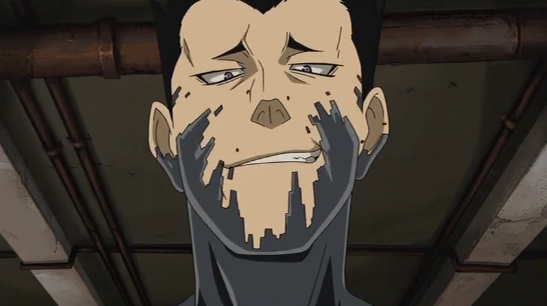 there is actually no excuse 1 they never say that his armor slows him down, if anything it should increase his speed because in his armored form he should be far stronger and thefore naturally faster, for 2 greed is greed he isn't stupid. later on when fighting bradley outside central greed would have known about bradley's eye and should have fully encased lin's body and they never once say that he can't do so while letting lin take control.

15
Why can't The Dwarf leave the flask?
5
Why does Trisha Elric have tomatoes?
19
Why is Wrath so human?
3
How did Dante or the Homonculus seal Greed the first time?
4
Why can't the homunculi perform Alchemy?
6
Why didn't Ross' broken bracelet cause suspicion?
11
Why didn't Edward Elric get his leg back?
6
Why is Kimblee the Crimson/Red Lotus Alchemist?
8
Why does Greed in FMA (2003) want to know how to bind a soul to an armor?
5
Why doesn't Edward transmute any large blocks or weapons other than spears and a blade?