In Dragon Ball Z, we are well acquainted with Androids 16, 17, and 18. In addition, we met Androids 19 and 20 (Dr. Gero) before 16-18. There may have been mention of others, but they were not developed or mentioned much to the extent of my memory.

I also think that we were introduced to Android 8 in Dragon Ball (the episode where Goku is ascending up the Muscle Tower with a new foe on each floor, one of which was Ninja Murasaki who on finding himself outmatched, ordered Android 8 to fight Goku, if I remember correctly).

However, I do not remember any mention of Androids 1-7, 9-15, and 21+, if they exist. Do they exist? Do we ever find out or know what happened to them? Is it further discussed in the manga?

According to the Wikia and my memory, Androids 1-7 and 9-12 were useless due to them being faulty (design problems) and some were too emotional and the kind.

As for Android 8 a.k.a. Eighter or Hat-San, as you rightly said, he had been depicted in the Dragon Ball manga, anime and the movies.

Now, Android 13-15 were introduced in the 7th movie, Dragon Ball Z: Super Android 13! and were the first few killing machines built successfully with the aim of killing Goku.

Regarding Androids 21+, I'd like to state the Wikia. They have been portrayed in Dragon Ball Fusions, Dragon Ball Heroes etc.

An Android in Dragon Ball Fusions whose design bears resemblance to Android 20.

A highly advanced variant of Android 8, utilized by the Time Breakers, comes in several different models including Mk. II and MX.

A highly advanced variant of Android 19, built by the revived Gero and utilized by the Time Breakers.

Other than this, there's the Android A-B-C section which was in the DBZ manga if I recall correctly, which has all the information about the Androids up till Cell. 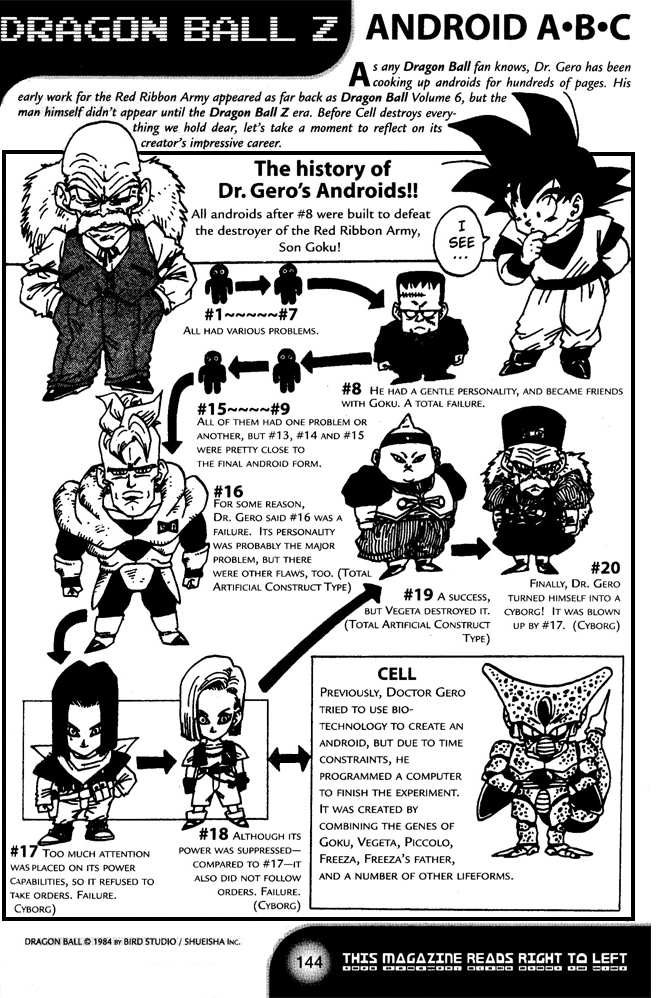 That's pretty much all there is in the manga.

According to the Wikia, Android 1-7 and 9-12 were completely artificial but Gero could not control their personalities.

Dr. Gero starts at 8 because it's a reference to Dr. Slump (Toriyama's 1st Hit). The main villain of the manga (Dr. Mashirito, a reference to Toriyama's editor) created 7 androids called "Caramel man". (Later he modified himself to caramel man 8 and 9).

Toriyama decided to continue from 8 for constructed androids.

Not the answer you're looking for? Browse other questions tagged dragon-ball-z dragon-ball .