Does each Region only have 8 gyms in Pokémon?

I remember that at the start of the Pokémon the anime, Professor Oak said that there are a lot of Gyms across the region. You only need 8 to enter the Pokémon league, thus Gary have 10 gym badges. 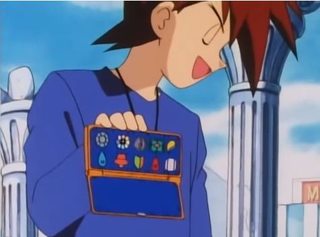 However, no matter who I ask, no one seems to remember this or heard of this. I watched Pokémon in Chinese sub with Japanese voice. so did I remember wrong or something else happened?

No. The pickle Tickler has essentially lists the gyms from the games, which are correct.
The Pokemon Anime however doesn't follow them. We know this because as you said, gary won 10 badges in the anime. And that is without the Earth Badge. Hence there were ATLEAST 11 gyms in Kanto region.

Alot of other characters in the anime like rivals have been shown with different badges that ash hasn't had. I this shows there are gym all over the region in the anime but you only need to defeat 8 gym leaders to enter the league.

Ash, misty and brock have also met other non-game gym leaders in the anime like Dorian from the coastline gym in johto. Barry, Morrison and Trip have different badges too.

Also note, Candice says that not many people come north to challenge her. Does that mean only people that beat her go to the Sinnoh League? Ergo, Sinnoh has more Gym options too.

The reason Ash battles only the game Gyms is to reduce confusion and have people look forward to the other Gyms.

Gary's Gym Badges: Some Known ones

Otoshi's Gym Badges: most completely different than normal ones.

Trip's Badges: Only the first 2 are from the games

The specific gyms in each region can be found here. There are six regions: Kanto, Johto, Hoenn, Sinnoh, Unova, and Kalos.

Kanto has at least 15 gyms as Gary who has 10 Badges has only 3 common to Ash (7 different Badges).

Other Badges observed in the anime which do not correspond to known Badges suggest that there are at least 9 Gyms in Hoenn, 11 in Sinnoh, 14 in Unova (4 different from Cameron, 2 different from Trip), and 11 in Kalos (3 different Badges from Sawyer).

There are more than 8 in Kalos too because Sawyer, Alain, Trevor, Tierno, and Ash have different badges, but they also have some in common too.

8
Is it necessary for the Gym Leaders of a region to know each other?

16
Why does Pokemon have a six Pokemon limit?
9
How does one start being a Pokemon Trainer without a Pokemon Professor?
8
Is it necessary for the Gym Leaders of a region to know each other?
10
Can Pokémon say only what their species is named as, or are they named with the only word they can say?
1
Why is Greninja Ash's only bonded Pokémon?
19
Has Ash ever cleared all 8 gyms without losing in any region?