What caused Charmeleon to become so disobedient to Ash?

Early in the series when Charmander evolves to Charmeleon, almost right away it begins to disobey Ash and refuse to listen to him. this continued to Charizard who would lounge around and blast Ash with a fire breath until he was frozen in ice during Ash's travels though the Orange Islands and Ash stayed up all night trying to melt the ice.

from what i remember Charmander willingly went with Ash when it's trainer abandoned it and he was about to die from the rain. if i followed the game logic i could assume that it was because Charmander's Level went too high in comparison to what badges Ash had however....

So what caused Charmeleon to become so disobedient to Ash?

I found this interesting and helpful tidbit of info from an old PokeCommunity forum thread. It's not conclusive, but it is explanatory:

I think of it as like Charmeleon was like a teenager. It had paid attention to Ash when it was young and naive, because it Ash showed it caring and love. However, when it got older, and learned more, it became cocky and saw Ash for what he was-- a rookie trainer that was still learning many of the basics. I think Charmeleon felt as if he didn't have any respect for Ash. When he started listening to Ash in the Orange Islands, it was after he saw how dedicated and serious Ash could be, even to something that was repeatedly rude and menacing to him. I think that when Charizard saw Ash doing that, he began to have some respect and admiration for the boy.

Charizard may have been a 'plot device' to show pokemon that disobey, but it was important because it showed that not even Ash could 'wow' every pokemon with a couple days of friendship. It also was an indication of Ash maturing.

And here's another interesting viewpoint from an old question on Quora:

Since Charmander was once rejected as weak he had gained an inferiority complex. He was always trying to prove himself. When he evolve into Charmeleon, he lost his fear and considering itself as proud. He gained self-pride and was considering itself as strong pokemon. Thus he was arrogant, and didn't listened Ash's orders. Later it evolved into a Charizard to prove its strength in front of a Aerodactyl. Charizard retained his disobedience to Ash as of Charmeleon. However, when Ash saved him after being frozen by Tad's Poliwrath's Ice Beam, Charizard's loyalty to Ash returned in full force; the best part of Charmander's pre-evolved personality was back. So the arrogance and disobedience that Charizard (or Charmeleon) was beacause he was boastful of his immense power.

Also, Ash didn't earn all of his badges fair and square. He got some because he defended gyms from Team Rocket. The anime badges don't make Pokemon obey, unlike the games.

In the episode "The Problem With Paras", Ash is trying to help Cassandra train up her weak Paras. When Charmeleon was called out, and Ash told it to go easy on Paras. Charmeleon didn't want to be weak, and that's when it stopped listening to Ash. It got even worse as it evolved into a Charizard.

Finally, in the Orange Islands, Ash helped thaw it out. While everyone was asleep, only Ash stayed up to warm up Charizard. Charizard seeing how much Ash cared for it, even it always disrespected him, finally decided to listen to him.

The writers obviously made Charmeleon disobedient, to show how training pokemon isn't easy.

As explained in the anime episode 44, Charmeleon became disobedient to Ash because he was too low leveled (the old lady in that episode told Ash this herself). At the time, he didn't have all the gym badges, only a few.

In episode 46, Charmeleon evolved but still doesn't listen to Ash because Charizard is now even higher leveled. At the last gym where it was Charizard vs Magmar, Charizard found Magmar to be a worthy opponent and that's when Charizard listened to Ash but stops listening to him afterward.

Then they went to the Charizard mountain where Ash left Charizard there to train and that's the story of Charizard.

You have to look at this from a certain point of view, especially when taking the badges and their obedience into account.

The first thing to note is to look at badges that come with an obedience effect, the Cascade, Rainbow, Marsh, and Earth Badges, none of them were won under their rightful means.

This can show that the badges go beyond just receiving them. Like a leader can just say "here you go" and drop it in your pocket, that doesn't mean you showed your ability as a trainer.

I believe Ash had one shot to show Charmeleon he was capable in the episode "Problem With Paris". Ash sends out Charmeleon and thinks of Charmeleon's mindset, he's thinking "I'm evolved, I'm powerful, let's do this" he even looks ready to battle. But what's the first thing Ash tells him? "Go east on it" that was probably it. ANY chance Ash had at controlling Charmeleon was gone right there. Charmeleon looks ready but once Ash tells it to lose, that's when Charmeleon looks pissed and glares at Ash then goes on a rampage. Even further in the episode, Ash shows no control, he just shows weakness and does nothing to stop or control Charmeleon. Pikachu is the one who has to step in and stop him.

The final thing to note is that Charmander had a previous owner, Damian so technically it's a "traded" pokemon which have a higher rate of disobedience.

You've gotta remember, that in Generation 1, Bulbasaur, Charmander and Squirtle were the Original Starter Pokémon. As such, when they evolve, they can and will, become more stubborn and unwilling to listen, to instructions, that their Trainer gives them.

Now, as far as Charmeleon and Charizard, are concerned, you have to remember, that, as Charmander, he, originally, belonged to Damian, who left him out in the rain, to die. Therefore, Ash's Charmander did suffer, from abandonment issues and probably didn't, initially, trust Ash and, when he later evolved, into Charmeleon and Charizard, he knew Ash was inexperienced, as a Trainer and lack of Gym Badges and is, therefore, why he disobeyed him. Also, it's a possibility, that, Charmander was a Traded Pokémon, which tend to be even more stubborn, than Trainer Caught Pokémon. Pikachu, initially, didn't respect or trust Ash, probably because it was his first day, as a Pokémon Trainer and Ash didn't really know, what he was doing or getting himself involved in and Pikachu nearly died, by a flock of Spearow, who Ash was willing to protect Pikachu from, which is why he leapt into the air and used Thundershock. The ONLY REASON, why Charizard FINALLY started listening to Ash, is because of Team Rocket AND despite his lack of experience as a Trainer or Gym Badges, Ash still had heart and cared for his Pokémon, as if they were family.

In the Pokemon game Red and FireRed, when the player is asked to choose his pokemon, Prof. Oak saying about Charmander: you should raise him patiently. 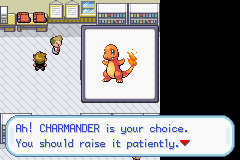 In other words, the game states it's not easy to raise Charmander and needs a lot of patience to raise it well (of course that in the game mechanics, it's less effective than in the anime).

In the anime, Ash's Charmander is found abandoned by Damien, saying that "but that puny thing was so weak it couldn't even beat the weakest opponent." Brock immediately says "Charmander may be weak against water Pokemon, but if their trainers work hard they can be strong." points to the words of Prof. Oak in the game.

So since Charmander was abandoned, it may cause a terrific change in his attitude with humans at the evolution with the next material, since not raised properly from the beginning.

And the reason for that, since the anime introduces a different approach to evolution, as in Advanced Challenge season ep26 "Exploud And Clear", a boy named Guy has a Loudred, and once evolved to Exploud, his entire behavior changed by not taking orders from Guy. When Guy asked the gang about the evolution changing personality, Brock tells him confidently "Absolutely, when a pokemon evolves, it goes through a lot of changes. You'll not only notice a personality change but also in its abilities too." 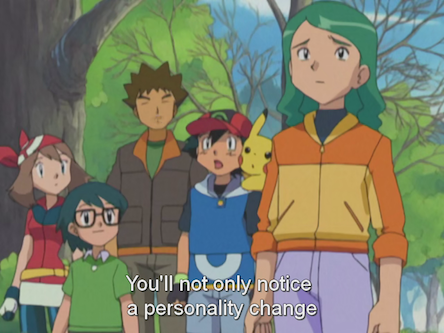 Strange enough, in the first season when Ash's Charmander evolved, Brock didn't say that, but probably his claiming is directly from Charmeleon behavior changes.

In that episode, eventually, Guy is protecting Exploud from Team Rocket, and then gain his Exploud trust again, with a less than half episode, Ash's Charmeleon and Charizard though, had been a lot of time together from the half of Indigo League through the Orange Islands, taking much more time than Guy and his Exploud, probably not only because Charmeleon's fast evolution but because of the above, making himself less trust in Ash's orders 'til see himself as equal with him.

28
What are the differences between Ash and Red?
22
Why doesn't Ash Ketchum catch legendary Pokémon?
11
Why doesn't Ash use his old Pokemon?
7
How strong is Ash?
39
How many pokemon did Ash catch?
7
What is the Ash-Greninja form of Greninja?
3
Which type of pokemon Ash dosen't have?