What game is Subaru playing with the girls?

In episode 5 of Ro-Kyu-Bu!, Subaru is trying to build teamwork by playing cards with the team members.

The first shot shown is of cards sequentially placed on the floor. There are some hearts missing. 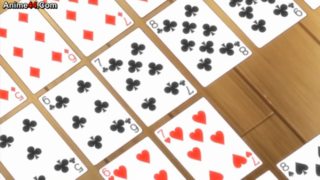 Then, each player goes around in the circle (they all have one card left except one). In this case, they each passed on their turn, until a fight broke out, and one player was holding two cards: the 5 and 8 of hearts, and was accused of "holding up" the game. 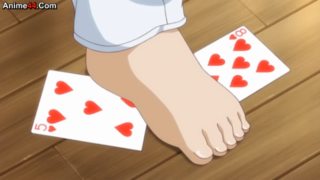 What is this game they're playing (and is it American, Japanese, or otherwise)? And, how was the player with the 5 and 8 of hearts holding it up?

The card game is Sevens.

To start, a seven must be played. The next person can then play another seven (creating a new row) or place an eight or a six on the existing seven. You must pass if you cannot do anything.

The "Holding up a game" that they're blaming one of the characters for, is when you decide to not play certain card(s) because you know you can block someone else off. For example, if he doesn't play the 5 or 8 of hearts, noone can play a four or lower, or a 9 or higher.

A common tactic is holding the lowest/highest of a suit that you have, because you don't need to put down any cards below/above that.

I've played it myself with relatives at home in Ireland, but I'm not sure where it originates.

Not the answer you're looking for? Browse other questions tagged ro-kyu-bu or ask your own question.

7
What is the significance of the title “Ro-Kyu-Bu!”?
6
What is the chibi-esque gathering at the end of each episode?
4
Is Subaru ever caught in the vault?
7
What was the shop that Subaru went into?
4
In episode 1 of rokyubu, what is the manga that one of the characters is reading?