Is Ika Musume the only humanoid squid creature?

In Shinryaku! Ika Musume (Squid Girl), the protagonist is a strange creature called Ika Musume who looks almost like a young girl, but has a number of strange squid-related abilities, such as spitting ink and using her hair as tentacles. She is also intent on invading humanity.

Are there any similar squid-like humanoids in the series, or is she the only one of her kind? 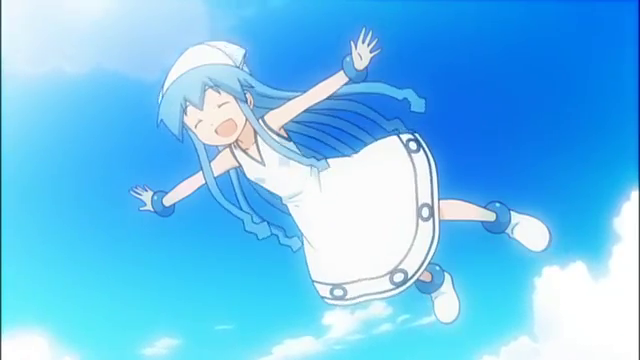 As far as I know, she's the only squid-like humanoid shown in the series. Though there is a miniatured version of her that appeared on people's dream, mostly Sanae's (source). In the last episode of Squid Girl, she met a girl named Kozue Tanabe which is implied that she also comes from the sea, as she has a hat similar to Squid Girl's and makes statements that indicate she isn't human. The first syllables of her name spell out 'tako' (たこ?), meaning octopus.

It was implied during the playing house episode that she has parents that are like her as she said that she was mimicking her father when she said "I want shrimp!" Also in the manga when she was talking to the school children with the teacher who is jelous of her about sea creatures, she pretty much said that her species lives deep in the ocean where there isn't any light from the sun and they communicate by flashing their bioluminescence. I also like to think that their species isn't big on specific names, so I think it's funny to call her dad "Ika oto-san"

I don't think she's alone, Kozue implied that at the end of season one. And besides, There would have to be more so that ika could have been born.

Not the answer you're looking for? Browse other questions tagged squid-girl or ask your own question.