Why is the series called “Amaama to Inazuma”?

The English title of the series Sweetness and Lightning is a pun on the idiom "sweetness and light".

The original Japanese title is Amaama to Inazuma (甘々と稲妻). I wanted to find out if there was a similar pun behind the Japanese title, so I started by looking up the words and was surprised to find that it's basically a literal translation of the English title: amaama means "sweet" or "sugary" and is the character 甘 (sweet) repeated, and inazuma means "lightning".

Without some kind of pun or joke behind it similar to the one in English, the Japanese title seems like sort of a strange combination of words to hit upon. It's such a direct equivalent to the English title that it almost looks like the English title was conceived of first and then translated back into Japanese, but that doesn't make sense because if the original author Gido Amagakure had come up with the English title, that would probably just be the title, since so many anime are named in English already.

I'm curious if there are any linguistic reasons to pick the Japanese title. I'm not asking for thematic reasons; the title is thematically appropriate in both languages, even without the pun. I'm asking why there was such a suitable pun in the English version that apparently didn't exist in the Japanese title, and whether the Japanese version also contains some pun or reference that I've missed. Was the fact that it translates so well into English just a massive coincidence? Is there something more to the Japanese title that I'm not seeing?

One interpretation of the title can be:

[稲妻]{いなつま} is basically a play on words for いなくなった妻, more or less "the wife that's no longer there". Implying that someone is widowed.

甘々ちゃん however is a bit more complex.

It can be interpreted as 甘な甘ちゃん. The expression here is a bit multifaceted, so I will try to break it down.

While 甘い does mean sweet, but it has other meaning out side of food. When used to describe a person, it can also mean naive.

Someone who is referred to as an 甘ちゃん can be described as a "soft" or "naive" person. Adding 甘い to describe someone who is an 甘ちゃん reinforces the naive stereotype. The nuiance here is a bit negative,implying that this person is a clueless (naive) idiot.

One can imply that the title refers to Inuzuma-sensei, being a very soft spoken, yet clueless single parent raising a daughter, who not only doesn't know how to cook, but doesn't know to to take care of Tsumugi (in place of his late wife).

You could imply that the alternate meaning to "sweetness and lighting" to be "the naive widow".

However, if you refer to the author's afterword in vol.1 of the manga, 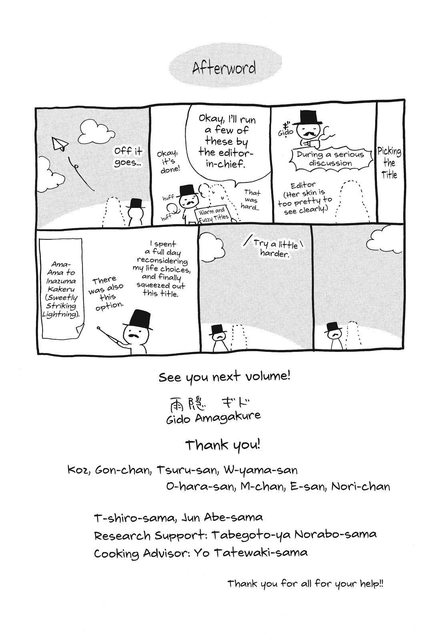 Despite many alternate interpretations of the title, the title is intended to be something warm and fuzzy that appeals to the 5 senses, nothing more than that.

I wrote a bit about Amaama to Inazuma names, including my take on why this is a marvelous title, here: http://kyradesuyo.wordpress.com/2016/07/24/kouhei-tsumugi-and-kotori-onamae-wa

The part about the title itself is by the end.

TLDR: 甘い(ama.i) is also often used to describe Naivety and Inazuma uses kanjis related to Rice and Wife, both tying very well into the whole premise of the story.

Not the answer you're looking for? Browse other questions tagged japanese-language sweetness-and-lightning or ask your own question.

8
Did Sakamoto really write in cursive?
7
How does “at all” mean “no hair”?
6
What is the meaning of “Cross” in the title Cross Ange?
7
Why are the translations of 邪王真眼 (jaou shingan) so divergent?
3
What's written behind the makeshift club sign?
9
Are there any Japanese words for “deport” and “incest” that sound similar enough for a bird brain to confuse?
8
The pun worked in English, but what was it in Japanese?
2
Is the Japanese well-translated to “kalos” here?
1
Does the Chobits title “ちょびっツ” intentionally look like the word “STUDY”?
3
What does the original Japanese title of “Spirited Away” mean?