How is that possible for Priscilla to kill Teresa?

I read the manga and watch the anime. It was awesome, but in only one place it doesn't make sense at all. When Priscilla killed Teresa.

I know, Priscilla was no 2 and she was too powerful, and she's got awakened in that second. But still we are talking about Teresa! Her best ability was that she could read the moves of her opponent. right?

@Memor-X was right, when Priscilla killed Teresa, Priscilla was already in an awakened state. It's true that Teresa could read the movement of her opponent because Teresa can sense the strength and speed of yoma energy flowing through her opponent's body. However, when Teresa fought Priscilla, Teresa couldn't read her movements because there was too much yoma power coming from all over Priscilla's body. 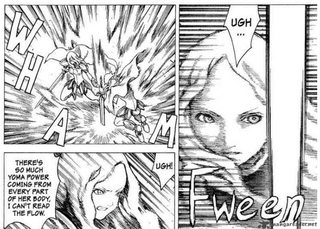 But of course, Teresa was still able to match her. She was using just enough yoma power for her eye color to change to counter Priscilla. However, when Priscilla passed her limit, she begged for Teresa to kill her and Teresa turned back to her normal state, seeing Priscilla on her knees. At this point Teresa probably couldn't read Priscilla's movements and let her guard down for a moment leading to Priscilla being able to kill her.

In your comment, it's true that when Clare awakened and became Teresa, she could beat Priscilla. However, Teresa was that strong only because of Clare's feelings toward Teresa. 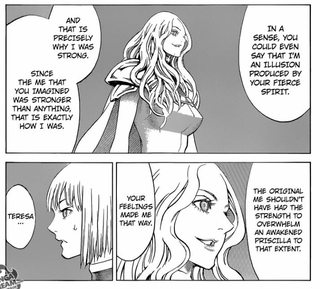 Teresa wasn't as focused as she normally would've been because Clare made her a bit soft. Her friend even said the old Teresa would've killed Priscilla when she was lying there crying. The old Teresa wouldn't have let it get that far.

Not the answer you're looking for? Browse other questions tagged claymore .

6
How does the Organization create Yoma?
14
How does a Claymore move up in rank within the Organization?
8
Do Claymore manga and anime have different endings?
6
Can female Claymores give birth to babies for their husbands?
6
Whose and When did Clare felt the aura of yoma as strong and ominious as of Riful for the first time?