Rem's encounter with Subaru at the end of episode 5

At the end of episode 5,

Why does Rem kill Subaru, despite nothing wrong with relationship between them ?

These events unfold starting at minute 22.

At the end of Episode 5, at night, Subaru is sick. He goes out to find help. He is attacked. At 23:35 to 23:40, we hear the sound of an iron weapon (which is likely to be Rem's morningstar). And Subaru is killed with brute force. 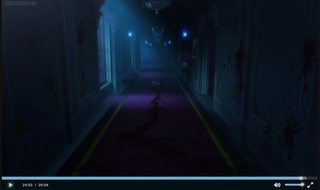 However, it is unclear why Rem does that, given that Rem's relationship with Subaru is looking good. They both go to the village and talk. Rem also looks happy then (at 17:29). 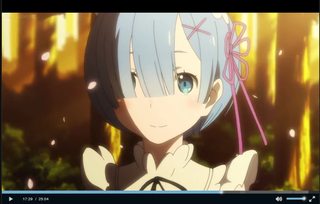 I did watch Episode 6, where Subaru is very distant from Rem, and he acts suspiciously, along with having the witch's scent that gets him killed. But does Rem kill Subaru in Episode 5 for the same reason?

Edited: From @ObviouslyJake's answer, I would like to add some more detail comparing the time frame in episodes 5 and 6: - Similar: Subaru's witch smell (which is the main reason, according to @ObviouslyJake) - Different: the relationship with Rem

Episode 5: They talk and go to the town together. Rem is happy. (As I said above, with an accompanying picture). In this episode, I can feel that Rem and Subaru become friends.

Episode 6: Rem tries to be distant from Subaru. Also, Subaru falls in her garden twice, which she has to fix. In this episode, Rem and Subaru are strangers.

Does the difference in the relationship between Subaru and Rem contribute to Subaru's death at the end of episode 5, compared to episode 6? Or is the witch's smell the only reason?

Because there are two episodes, with some different choices and paths, I think there must be something different here. I feel there has to be, but I can't find it.

Edit (Aug 31, 2016): Thanks to @Davies comment and @ObviouslyJake, here is what I have in my head so far: in episode 6, things are worse than in episode 5. Here, we're talking about why Rem kills Subaru in episode 5, despite them having a good relationship.

My theory is that Rem has a dual personality: Rem the maid, and Rem the oni who hates the Witch. 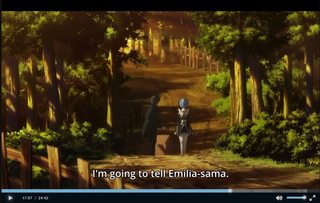 However, Rem the oni still hates the Witch, which leads to Rem killing Subaru because of his Witch smell.

Therefore, here is a summary: Rem will try to kill Subaru because of the Witch smell unless the following condition is satisfied:

The second condition is satisfied when Subaru saves Rem from the demon beast in the forest in episode 11. The proof is in episode 18, from 20:00 to 21:00, where Rem confirms that. 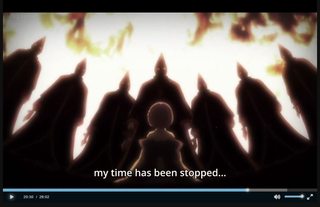 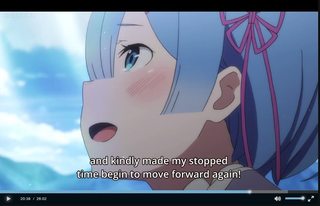 That is what I think, please tell me if I wrong.

The short answer is... Yes, he was killed because of his witch smell.

Rem is very suspicious of Subaru in this time frame. He is a new person, entering a household she has grown to love. Now think about it: if a new person, Subaru, comes in, has distinct clothing that she's never seen before, is very 'friendly' with Emilia the main guest of the house, and smells like the witch. It's not looking good for our favourite little protagonist in her eyes.

Furthermore, we saw a scene somewhere in there where Roswaald whispered to Rem (and Ram I think) to keep an eye on him, as he was also suspicious, feeding her the seed of doubt about Subaru, even more so than before. Everyone was suspicious. He could have been a potential threat to their claim for the kingdom's throne.

This part is a spoiler for a later episode. If you don't want to know spoilers, don't read this part.

As we know, Rem's family and her whole village, aside from herself and her sister, were killed by the witch's cultists, an organisation that, as stated, worships the Jealous Witch. Now think Subaru, a suspicious character who just appeared, smells just like the witch.

We can tell from this that she has a personal grudge against him for this. In conclusion: Yes, you're correct. Rem killed Subaru because he smelled like the witch, which she had personal history with.

I believe the change in Rem around Subaru could be an inkling of sympathy for him. For example, when he wakes up, he is sporadic, screams and then realizes the twins are looking over him, at which point he is back to his 'playful, energized' self.

I feel like she would see him as a 'madman' who isn't right in the head, to the extent that she is friendly with him, as to not convey her concern or trigger his madness. It could also be that she doesn't want to show disrespect to him, as he is a house guest, doing so would tarnish her own reputation, so in public, it is best to stay friendly.

As the question states, 'Am I wrong?' about the dual personality of Rem. Personally, I believe you're right and wrong at the same time. I believe they're the same personality. It's just that Rem is putting on a brave face whenever she smiles. A quote I very much like, which I heard from someone, is "Don't trust someone just because the smile." I think that applies here.

Rem smiles a lot, due to the fact that she has to keep a brave face, as to not disappoint her sister, as well as to not tarnish the manor's professionalism.

Think of it, in terms of two girls. Girl 1 (Rem) is weaker than Girl 2. Girl 2 (Ram) was stronger, though lost her weapon, so she's now weak and can't use a weapon anymore.

If Girl 1 were to just sulk and throw her weapon away, when she can very well still use it, how would that make Girl 2 feel? This could also be why she keeps a smile on her face. She's that used to putting up her smile, to not disappoint her sister, that she does it with everyone. It's become a natural thing.

Now onto the subtitles on the last picture you included, as they reminded me of something else.

She said "My time has been stopped". As in, there was no way for her to move past that incident that she was stuck in her own madness, revenge stricken madness. Subaru comes along and saves her from this, later down the line, so that her time keeps moving (I'm not really sure how, I'd have to watch the episodes again).

However, this doesn't necessarily mean that the reason you provided was the right one. She stopped trying to kill him, as she realized, through talking to him, through spending time with him, that he was actually a trustworthy character, in the sense that he wasn't anything to do with the witch's cult.

He openly admitted to her that he smelled like the witch. He wasn't trying to hide the fact, he was also unsure of why it existed. Rem's a perceptive little demon, so she picked up on how his emotions and expressions were in the end: trustworthy.

However, having only just met him in episodes 5/6, he was just another witch's disciple, a threat she had to eliminate for her own gain, for the revenge of her family, her sister and herself.

Uh I know you guys might already know by now but in episode 5 when Rem and Subaru are walking back they start talking about demons and gods then Rem asks Subaru if he likes demons or whatever and he basically said how gods never really do much and that he likes demons which witches are usually acquainted with which leads to Rem killing him at the end of episode 5.

Just wanted to clarify that when Roswaald was talking about Subaru being suspicious or not, he was only talking to ram, not to rem.

The fact that rem was so friendly with Subaru but kills him hours later doesen't make much sense to me even considering the witche's scent.

I think a more probable answer is that it was Ram who killed Subaru, but then again I don't know if Ram ever uses that chain weapon :/

If it really is Rem that kills him, then I think the story was not very well thought through, because episode 5 is THE episode where Subaru and Rem bond the most (and genuinely so)

HE HAD WITCH SMELL IN ALL EPS

Where is the logic? There is non. Just poor screenwriting.

3
How and why is Subaru connected to the Witch (Satella)?
5
Why didn't Rem die immediately after being mutilated so severely?
2
How much does the light novel of Re:Zero differ from the anime at the end of episode 21 (Subaru/Rem scene)?
2
What does Satella whisper to Subaru as he spams declarations of his return by death?
3
Are there multiple realities in Re:Zero, or is it just one reality rewinding?
4
Does Beatrice know about Return By Death?
4
What is the relationship between Subaru and Rem after he confesses his feeling in episode 25?
5
Why did Subaru suggest to run away with Rem?
7
How does the checkpoint get upgraded in Re:Zero?
2
How did Subaru lose the ability to enter the trials?