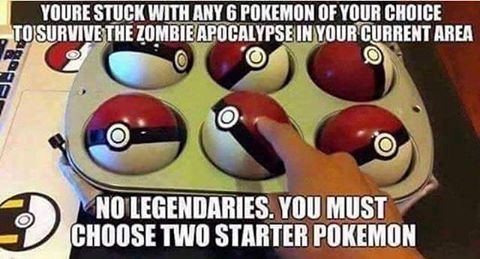 For sure I would take Charmander for the flame-throwing capabilities, but for the second starter I was thinking about grabbing Squirtle.

Gaining access to clean water would be one of the biggest challenges you would face in a zombie apocalypse, and Squirtle's water gun could be a very easy solution.

Question is, is that water potable?

I'll answer this with an answer I found here via a user by the name of ItalianRapscallion.

I assume, since so much is generated, its just summoned from a point inside their mouth (or whatever aperture, gem, whathaveyou). That is, it comes into being right then (not teleported from somewhere or produced by an organ -- since you cannot compress a liquid, a squirtle, say, could not store the amount of water you typically see him emitting)...

My guess is no, because if you are materializing water from thin air, would that pokemagic create minerals / salt at normal levels too? It's probably pure water, maybe a little saliva mixed in depending on the aperture from whence it came (but if so it wouldn't be enough to make a difference). In other words, drinking it would leech all the minerals and saline out of your cells, it wouldn't hydrate you, and if you drank enough you would eventually explode on a cellular level.

Edit: further mulling made me realize an easy test, (which i don't recall from the show) Do we ever see electricity travelling along water spewed from a water pokemon? If so, the water is conductive, i.e. mineralized, therefore you can probably drink it.

Given the fact that Suicune has the ability to "walk across water and purify dirty water with one touch", I believe that the fact that the water Pokemon produce is in fact not pure due to the fact that it was never stated anywhere that it was indeed pure, as well as the fact that one Pokemon out of all of them was given the phrasing of pure water. (Suicune is legendary, so you can't just choose him and forget about the water purity issues.)

In all honesty through my searches of the web, I haven't found anything conclusive on the topic, so we can put it in a grey area, in which we are never really sure of the answer until we can see it for ourselves.

That said, the fact that Water Type Pokemon are weak to Pokemon of the Electric Type, it is safe to assume that the water they produce does indeed contain the minerals and nutrients it requires.

Even with this info however, we don't know just how bad the state of the water is, as that is never discussed. So even though it does contain the minerals, we don't know if it contains any virus, or disease that would harm us. (Considering the nature of the games and anime, I think it's safe to assume they don't, but for the sake of this, we can't rule it out. It could be life or death after all.)

My conclusion is that: It should be safe, however we can't guarantee it for multiple reasons, so keeping a Squirtle would be a good idea, though try to bring a form of filter with you, for a safety precaution.

Edit 2: Thanks to Senshin I was informed that distilled water would not kill you, unless it was the only water you drink. Meaning that, if you have some other source of water coming in, from time to time, on a regular basis, you would be completely fine in that instance. This, sadly however, still doesn't cover the fact that:

I say again, bring a water filter of some sort, as well as a Squirtle, to ensure your own safety.