Why does the use of CGI in anime seem unrealistic as compared to other western animations?

In recent times more and more series are animated with CGI, mostly a combination of 3D objects with 2D illustrations. For example, Berserker in Fate/Zero.

More recent examples include Ajin and Kingdom, etc. God Eater also used CGI techniques for animation. However, except for a few scenes, I always feel the movement of objects is slow, unsteady and frankly quite unrealistic. Take an example of sword fights in Kingdom and let's say something like Bleach (not the overall animation, just some action sequences). Though both require suspension of disbelief the ones in Kingdom are way below.

Comparing this to many western animations we can see they do a great job with 3D animation. Why is this a problem in anime? Is it related to costs or the decision to use lower fps or something else?

If by western animation, you mean movies made by studios like Pixar, the major factors in play is the budget and technical expertise. Budget-wise, Pixar has a $200 million budget for "Finding Dory": 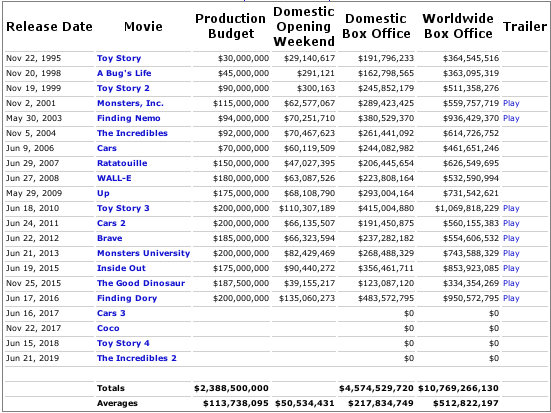 Budget numbers are usually pretty hard to come by for anime but there's been some research on the matter by the Media Development Research Institute. At this link, it breaks down the budget for a 30 minute timeslot anime episode, which really boils down to about 21-22 minutes minus the commercials and OP/ED.

Even if we lop all of the production plus animation and photography, that's still maybe around $100k of budget for 22 minutes. Compare that to Pixar's average budget for "Finding Dory" of maybe $500k per minute.

The other thing is the expertise of these studios. Pixar has been, for quite some time now, the top studio for 3d CGI. Their movies are almost entirely CGI and they've got over 600 employees. Most Japanese studios don't have anywhere close to this level of technical expertise and skill, or the size of an organization that can pump out this kind of work consistently and regularly. Probably an apt comparison would be Japanese animation studios vs animation studios in China.

Some other factors to consider:

As for why they use CGI at all? The biggest reason (though I can't seem to find any sources to cite) is probably that it costs less, though that sounds like irony. The idea is that doing "ok looking" CGI and making the subject matter (or action) look a bit more realistic is cheaper than spending a lot of artists trying to make the same subject matter look better (or in most cases, just as good) completely by hand. If you're going to have a mecha show where there are hundreds of mechs that all look exactly the same, it's probably cheaper to just model it as opposed to having someone draw them all. If there's going to be a lot of panning, rotating camera shots, it's easier to model the subject and just move the camera as opposed to hand drawing the subject to imitate such movement.

3
Which animation style is used in Kingdom?

4
Why does Tsubasa Reservoir Chronicle use the same characters as Card Captor Sakura?
19
Why do anime discs cost so much in Japan compared to other countries?
2
Why does season 2 of Gurren Lagann start so differently compared to season 1?
10
Why do anime and manga use the same faces?
8
Waiting in the Summer and Onegai Sensei seem to plagiarise each other. Is this normal in anime/manga?
2
Why do anime production studios never seem to announce if they plan to cancel a series, often just leaving it in limbo for years?
0
Why do first episodes of anime sometimes use content from several chapters into the manga or novel?