Are these constellations real? 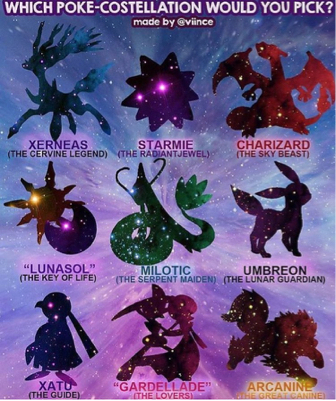 Believe it or not, constellations are a thing in the Pokémon universe. Well, sort of; they don't really have any lore behind them at all.

This brings me to your image; with the exception of Milotic and Gardevoir, none of those constellations exist in any media related to Pokémon, according to Bulbapedia. Pokemon Channel is the only media in which both Milotic and Gardevoir appear as far as games, and in the movie Jirachi: Wish Maker, they are seen as well.

...Also, your particular picture is unofficial art work, so the likelihood of it being canon at all is pretty much nil.

10
Are there any relations between the different “sagas” in Pokémon Special/Pokémon Adventures manga?
8
Why is Tangelo Island named as such?
9
What are the 2003 Wendy's Promotional Pokémon Toys?
8
How come Abra was able to evolve in episode 22?
11
Why does Charmander die if his flame goes out?
8
Is “Payday” Money, real money?
12
Can Poké Balls technically catch humans?
3
How do Poké Ball capsule and seals work?