Why does Suzuki speak in both English and Japanese?

In Kabaneri of the Iron Fortress, one of the "steam smiths" speaks in Japanese with bits and phrases in plain English. His name is Suzuki, and he is one of the steam smiths that fixes damage to the train: 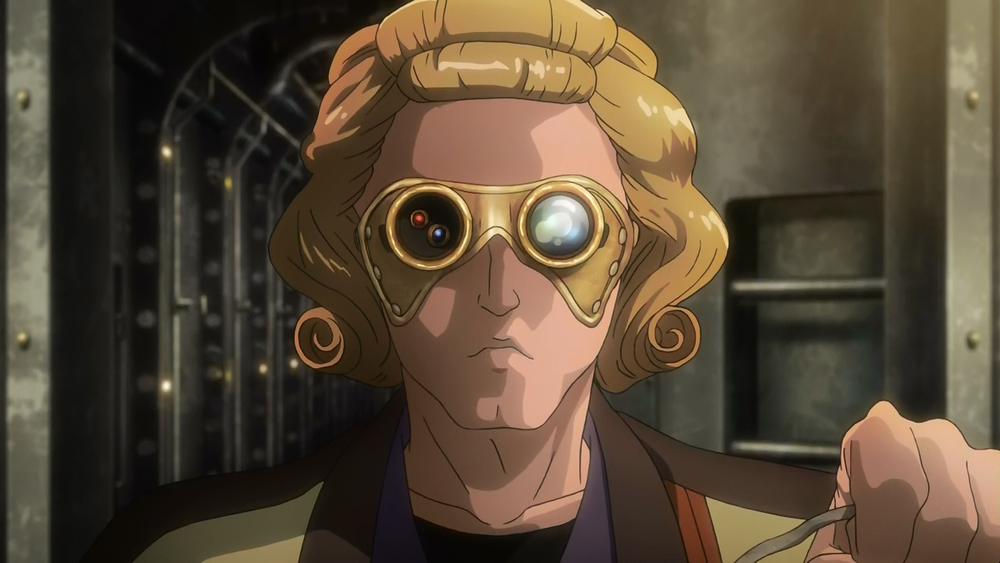 In the Kabaneri universe, the steam technology that powers all their steampunk stuff was initially developed outside Japan. The particular system that drives the railforts is named the "McRucky engine", and is of British design. The first major outbreak of kabane was reportedly somewhere in eastern Europe.

It seems plausible that most steamsmiths would be from Europe (perhaps Britain in particular) given that that's where steam technology originated. Suzuki could well be a steamsmith from Europe who ended up in Japan, perhaps fleeing the kabane (Japan, being an island on the periphery of Afro-Eurasia, is about as far as you can get from eastern Europe without hopping over to the Americas). In this case, it would be unsurprising that his speech is 1.) heavily accented; and 2.) has a heavy admixture of English.

(Don't be fooled by his Japanese-seeming name - in the real world around the time of the Industrial Revolution, it was common for Westerners in Japan to take Japanese names. See, for example, Lafcadio Hearn, who was known in Japan as "Koizumi Yakumo".)

It is likely that the manga and/or light novels will have more detail about this, but I have not read any of them. Likewise, if they ever release one of those production-notes compilations, that'd be a good thing to have a look at.

it seems that the English words may even be voiced by someone else, as they sound incredibly out of place with the Japanese dialogue

Suzuki's voice actor, Maxwell Powers, is fluent in both languages. His YouTube channel has some examples of his non-anime voice work. According to his Japanese Wikipedia article, he grew up in the US, so he's clearly a native speaker of English, and his mother is Japanese and he went to college in Japan, so it's no surprise that his Japanese is pretty good too. It's pretty clear to me that he voices all of Suzuki's lines.

(Incidentally, he apparently is emceeing the live event "Koutetsujou no Utage" which is happening as I type.)

Not the answer you're looking for? Browse other questions tagged koutetsujou-no-kabaneri or ask your own question.