I've been getting caught up on One Piece and I noticed that in chapter 837 (Luffy vs Commander Cracker) page 16, Luffy states that Cracker's Busoshoku was the hardest thing he came across. 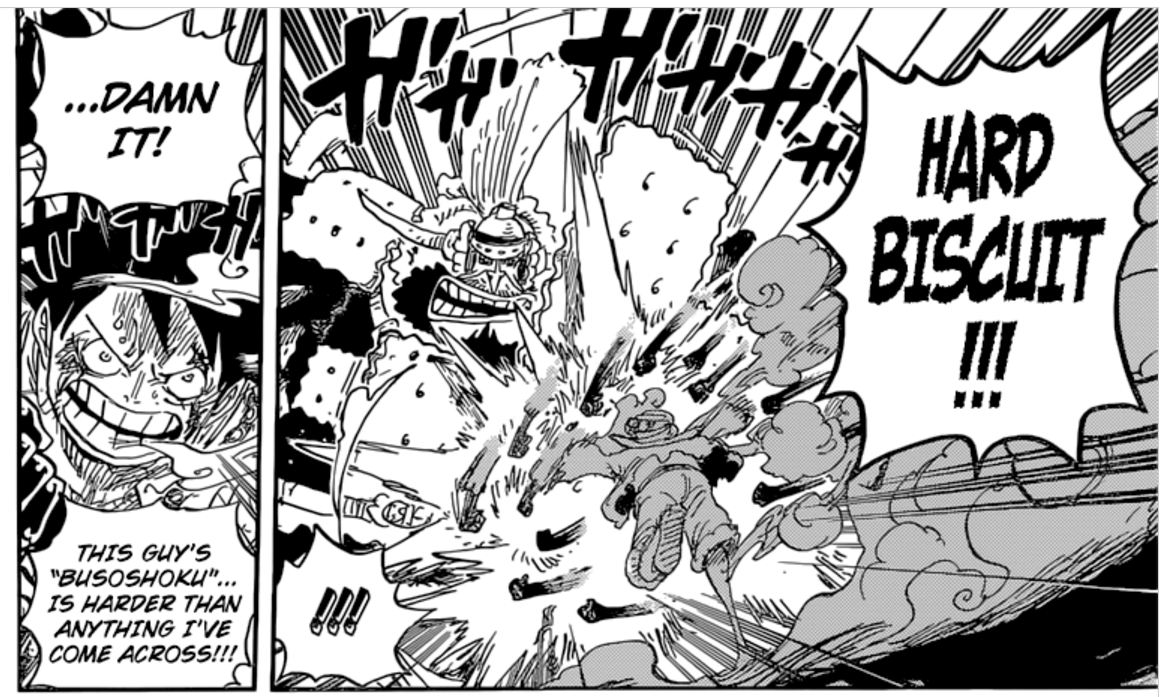 At first glance, I am instantly reminded of power levels in Dragon Ball Z.

My question is if a sort of grading system is in place determining whose Haki is stronger?

It makes perfect sense that Armament Haki can be used at different levels of intensity. This has already been shown from early on for Observation Haki and Conqueror's Haki. Enel could sense people over the entire sky island while his men seemed to only see the people they were fighting. Luffy went from stunning a room with little control to thousands on Fishman island. The fight betweeen Chinjao and Luffy seemed to indicate that Luffy's won because his Haki was stronger. This means there are relative levels of power for any of the three types of Haki.

There is, however, no mention in the text of any measurable rating of this strength.

There is, however, a DBZ like powerlevel already in the story. The CP9 are rated based on Doriki in the Enes Lobby Arc. A common armed soldier has a 10 Doriki and 500 is superhuman. Lucci was 4000. This method explictly only counts physical strength and ignored devil fruit powers. There is no indication (as it had not yet been introduced) as to how Haki would impact this measurement system. If the CP9 developed a method to rate their Rokushiki, it seems guarenteed that CP0 has a way to rate Haki. We just don't know anything about it yet.

8
What are the names and grades of Zoro's swords?
2
What skills introduced prior to the formal introduction of Haki are Busoshoku Haki based?
5
Haki vs.Venom Venom Fruit
5
How does Haki work?
4
Haki against Jewelry Bonney
8
Is Conqueror's Haki Indiscriminate?
2
Is Haki fire proof?
1
What is the difference between Haki and Conquerors haki?
3
When did Ussop awaken haki?
1
Coating Foreign objects with HAKI