Was Griever created by Squall's mind?

Griever is one of the bosses on the final battle sequence of Final Fantasy VIII.

You get the option of naming (or using the default name) Griever mid-game, when Rinoa asks about the lion ring Squall uses.

There is no evidence of Griever existing before he is used by Ultimecia.

Given the mind-games that take place in the story, it is no wonder if Squall's mind could create a GF.

In Squall's mind, the strongest GF ...
[emphasis mine]

So it seems like a bit of Chunibyo by Squall's part.

The wiki on Griever speculates that this is indeed true:

Griever's true nature is made more explicit in the Japanese version of the game where Ultimecia claims to summon the one entity Squall views as the most powerful whose power would only increase the stronger Squall envisions it. This means that this manifestation of Griever is powerful purely because of his importance as a symbol in Squall's mind, and could even be seen as Squall needing to overcome a part of himself to win the battle.

There we have a hint that Griever did not exist before that final battle. So how did Griever come to be?

Ultimecia
"Let me summon the one you think is the strongest thing."
"The stronger you think it is,"
"the more it will torment you."
"Heh heh."

This is because Squall admired and believed Lion as a powerful creature, as described in Final Fantasy 20th Anniversary Ultimania File 2: Scenario guide book, page 247: 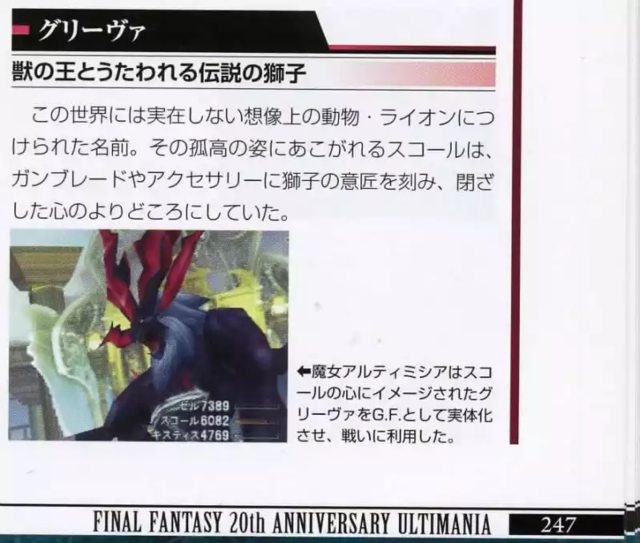 The legendary lion famous as king of the beasts

A name attached to Lion, an imaginary animal that doesn't exist in this world. Squall, who admires its solitary figure, had his gunblade and accessories etched with lion design, and made it as a foundation in his closed mind.

⇐ The sorceress Ultimecia materialized Griever from images in Squall's mind as a G.F. and used it in the battle.

3
What was it that Yevon did to the Al Bhed?
6
The science behind Squall's Gunblade, if there is any?
0
Was Cloud and Tifa living together and raising kids in Advent Children?