What game are António, Carlos and Jobim playing?

In Cowboy Bebop, there are three men that are seen recurrently: António, Carlos and Jobim.
They are most often found playing cards. 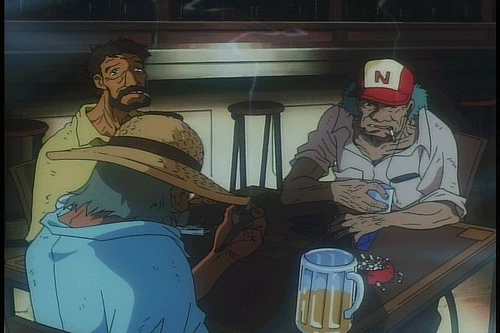 What game are they playing? I don't remember it ever being stated in the anime. Was it ever stated elsewhere?

It was never revealed in the anime and it isn't said on the wiki or anywhere else of relevance.

This is the closest I have ever seen their mention to a card game.

... Spike and Jet have arrived and ready to hit the tables, with Jet having a good feeling after having a dream involving Charlie Parker. The two split off with Jet playing the slots while Spike mills around the tables, gaining some chips after helping three old men win a card game. Eventually he settles on a Blackjack table where Alice is dealing ...

Here are all the episodes they have been featured in and it isn't said or shown in any. So it was never stated and in general they mainly acted as comic relief.