No matter what the job is, finding cats, to avenging a murdered child, all it takes for Yato to grant those is just a measly ¥5. I suspect that this practice dated back from during the time when Yato was actively known as God of Disaster.

Since there is inflation, while ¥5 now worths almost nothing, it must have worth a lot more in the past. If this is the reason, then how much far in the past was the year that Yato was actively known as the God of Disaster if we are to use real world's currency value?

If this was not the case, why is the fee just ¥5 while other Gods have it more, which can be seen from their lavish and abundant number of shrines?

It is because of Japanese culture, not the monetary value. 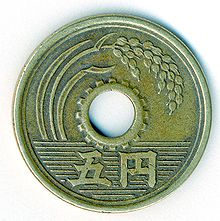 The Japanese for “five yen,” go en (五円) is a homophone with go-en (御縁), “en” being a word for causal connection or relationship, and “go” being a respectful prefix. As a result, five-yen coins are commonly given as donations at Shinto shrines with the intention of establishing a good connection with the deity of the shrine, and is widely believed it is best to insert a single five-yen coin into a new wallet before inserting any other money.

The reason why the five yen coin is lucky is because it’s called a “go-EN” coin. The number 5 is “go” in Japanese, and “yen” is pronounced more like “en.”

To be precise, “go-EN” means “honorably good luck” especially in terms of relationships. So people throw in these coins at a temple hoping to meet new people who might bring fortune, business, friendship or love.

Kofuku had mentioned that if no one remembered a god, that God would vanish forever. Yukine had also told Yato to raise the cost of him a bit, but instead, Yato said 'and not get any customers at all'.

In my opinion, I think Yato wants people to remember him as it also means he will gain the incarnation ability. Of course, I could be wrong.

I think the reason that Yato only asks for 5 yen is to symbolise how desperate he is for a job. I mean would you personally pay a random guy on the street (who says hes a god) to do something for you if they were priced similar to a professional. This just increases Yato's likeableness as it makes the reader/viewers sympathise more with him and makes him seem like a little kid enjoying getting some pocket money. Yato's character being a goofy and irresponsible could imply that Yato, thought wanting to be a God, he just wants to be remembered and stay himself... even if that means keeping his prices the same to continue being remembered as the Cheap God. I think this is also done to make us empathise with Yato when we find out about his dark past as through the flashbacks we see a very different and gloomy Yato whereas throughout the whole series we have only seen the funny and childish almost Yato. This could once again be a reason why Yato only charges 5 yen for his services as he could be trying to take peoples mind away from his 'evil' (as some may say) past and instead making people focus on how cheap he charges.

5
Is there a reason Yato couldn't summon Nora in the final battle of the first season of Noragami?
4
Did Yato cut Hiyori's ties to the Far-Shore in episode 6 of Aragoto?
10
Why does Nora's darkness/corruption not affect Yato (or any other God that has named her, for that matter)?
5
Why was Ebisu killed by the Pacification Ring?
2
How did Nora return from the Underworld despite being left there by Yato?
1
Why did Yukine stop stinging Yato?
3
Is there any historical origins for the masks in Noragami?