Is the Yuri on Ice anime shounen ai? I want to watch the anime but it gives me yaoi vibes. I'm not a big fan of yaoi, so I want to know if it is a yaoi.

This answer was written when the show was first airing, in Fall 2016. I don't claim to have watched it; I've only gleaned information about this particular show from Wikipedia.

The description for it on Wikipedia gives a pretty good summary of the story.

Yuri!!! on Ice follows a Japanese figure skater named Yuri Katsuki following a crushing defeat during the final of a Grand Prix competition. As Yuri becomes mixed over his feelings about ice skating, among the other troubles in his life, he goes to an ice rink and perfectly mimics an advanced skating routine performed by the famous Russian figure skater Victor Nikiforov. When footage of Yuri's performance is uploaded to the internet, it catches the attention of Victor, who decides to become Yuri's coach and train him alongside another skater, Yuri Plisetsky.

From this, I can surmise:

Not sure I see any yaoi or shounen ai vibes that are explicit in there, since this is predominately an anime about figure skating with a cast of male characters. There may be some degree of fanservice to that direction, but you really won't know much about the show until you watch the first couple of episodes.

Then again, if this genuinely makes you feel uncomfortable, share a moment of sympathy for every late-teen/early 20s woman who sees an all-girls anime and plenty of shojo ai overtones...

I'm not sure of how to best assess the genre of Yuri!!! on Ice. There are two approaches people seem to take with genre labels:

I don't know where a happy medium between these two extremes would be, in the case of the BL genre. However, part of the concern here seems to be about whether there is any major same-sex romance in Yuri!!! on Ice, and writing about that is straightforward. (Mouse-over to view spoilers.)

The relationship between Victor and Yuri Katsuki is eventually pushed to a point where it's difficult to not see it as romantic in nature, in light of a combination of both plot points (e.g. the implication of a kiss in episode 7) and various markers of physical intimacy that we're shown (e.g. handholding in episode 10). However, the whole matter is approached a bit indirectly.

Going back to the first point, would this mean that Yuri!!! on Ice is then automatically BL (in the sense of having a romance between two men), under approach (2)? The mere development of a romantic element doesn't have to mean that a work is centred on romance though, so it really depends on what one thinks is the focus of the story. (Alas, I can't give a personal opinion on the role of romance in the series without first doing a rewatch.)

I just finished the series and I TOTALLY can tell there's no yaoi in it.

Well, Yaoi on Ice is, errr sorry, I meant Yuri on Ice is a sports anime with VERY straight males. 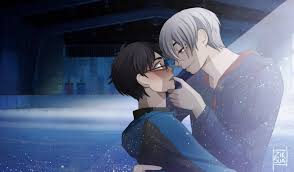 Watch this 20-second video. The way the two main characters kiss is SO manly.

Now seriously, it definitely has Yaoi as one of the main tags. As a man that loves Yuri (I mean the girl on girl thing, not the main character of the series) Yaoi isn't my cup of tea but this one was actually very good. It doesn't matter if you don't like Yaoi, it isn't 100% focused on it at all. If you like sports anime just watch it. To give you an example. In Baby Steps we see the relationship between Natsu and Eiji. it's more or less like that. They like each other and the like but you can definitely watch the series even if you hate romance as it isn't the only element in the series.

1
What piano piece is Emil Nekola skating to in his short program?
4
Why was “Gold Wedding Ring” displayed for less than a second?
3
What is the song that plays at the end of episode 3 after Yuri finishes his performance?
9
Are the ice skaters in Yuri On Ice based on real life counterparts?
0
What does Viktor yell in Yuri On Ice?
3
What do we know about Yuri Katsuki's college education?
2
What does Victor whisper to Yakov before entering the airplane?
0
Music in Yuri on Ice in Season 1 Episode 12