How similar is alchemy in FMA to the real alchemy?

In their concept, they are very much alike. In their implementation, they are starkly different.

First, it is very important to say that there is hardly a single definition of alchemy. Some of its first mentions are from texts hundreds of years old, but most highlight three things: Transmutation of base metals (usually to gold), creating a universal cure, and creating a universal solvent.

Using FMA alchemy, it is possible to transmute base metals into gold (as Ed did in Yoki's village), and through proper use of alchemy, healing and medicinal applications are possible. Other elemental transmutations, which were less sought by real-life alchemy but still present in research, are also done. 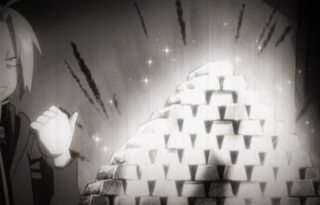 Real-world alchemy was often done in the pursuit of the philosopher's stone, a legendary substance which was believed to provide everlasting life (as it did in Harry Potter and the Philosopher's Stone); the stone in FMA did this, more or less, as well.

This philosopher's stone was originally believed to be produced through the magnum opus. This is never seen (nor even mentioned) in FMA; instead, all alchemy is done through a transmutation circle (with a few exceptions), including creation of the stone. Transmutation circles are not strictly based on any tradition of alchemy (though they use alchemical symbols and other similar glyphs).

In real life, the origin of the stone was that it was possessed by Adam, who had received it from God, and its ingredients were never discovered. In FMA, the stone is made of human life. 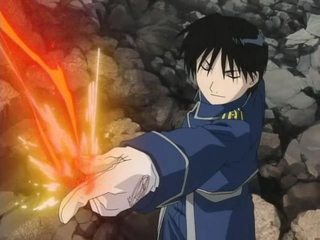 Similar to the circles, there is no real mention of using hands to physically guide energy in alchemy. There were not dreams of making weapons out of the floor or using the techniques for war. Alchemy was done mostly in a lab, using techniques like the magnum opus to create chemicals and other such processes. It's no surprise, then, that the believed art of alchemy was for science and advancement of oneself, so much so that it founded today's chemistry (and through Paracelsus—mentioned below—chemical medicine).

The sources of energy for the transmutations are also different; in FMA, they use tectonic energy and the "Dragon's Pulse" for Alkahestry. In real life, the energy comes from chemical bonds and thermal energy.

The universal solvent I mentioned above is called Alkahest, which is the base of the name Alkahestry (used in the English dub).

Generally, Alkahestry is much closer to what we think of as alchemy from the real world. Its purpose—medicinal usage—is much closer to the medical and chemical applications that real-world alchemy sought. In the alchemical notes that they delve into later into the series, there is a drug, "rasayana" (based on the Indian term rasayana), which is used for longevity and which is stated to "transform all metals to gold and restore youth to the elderly"; in that way, this substance appears to be much like the philosopher's stone concept seen in real life.

However, Alkahestry (like normal FMA alchemy) uses hand gestures and circles instead of actual chemicals; also, as mentioned above, its source of energy (the "Dragon's Pulse") is something that is not found in ancient real-world alchemy.

They also have quite a few differences:

11
How does the equivalent exchange of alchemy work?
8
How come Alphonse can do alchemy in Fullmetal Alchemist: Brotherhood?
18
How similar is Hohenheim (FMA) to the real Hohenheim?
11
What are the origins of alchemy in Fullmetal Alchemist?
6
Is there any alchemy-based transportation in FMA?
8
Can someone learn more than one alchemy?
4
Why can't the homunculi perform Alchemy?
6
Does the world on the other side of the gate exist for alchemy to exist?
11
If you had two automail arms, could you still use alchemy?