In the third volume of the Tsukihime manga, an illustration (possibly NSFW) of a number of female characters at a hot spring appears.

I can recognize most of the characters here. (Akiha stands outside of the bath with the twins Hisui and Kohaku; Arcueid is sitting on a stone surface, with Len at her feet; the girl left of Arcueid is Yumizuka; and Ciel is wearing her glasses.) However, I don't recognize the blonde character with green eyes or the brunette with a bathing cap. 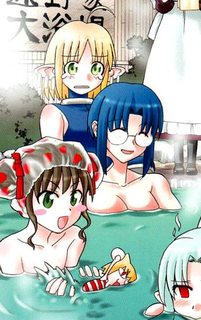 Who are these two characters?

The blonde is Nanako or Seven because her name is short for the Seventh Holy Scripture. 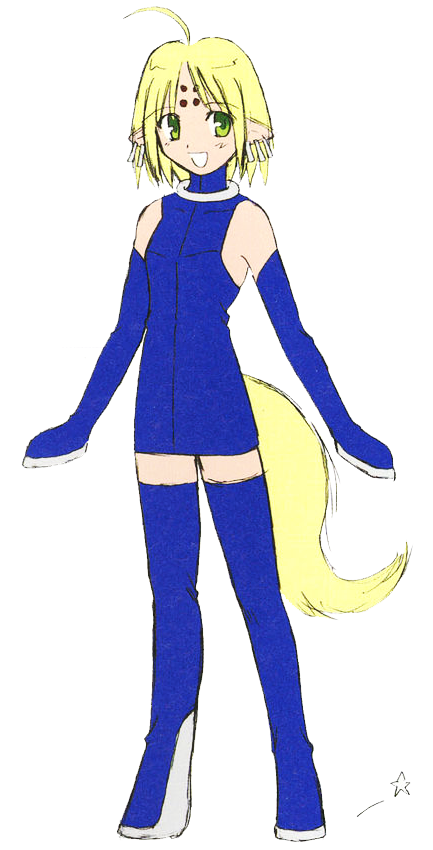 The Seventh Holy Scripture was created from combining the horn of a dead Unicorn that, had turned into a nature spirit and the soul of a young woman, who gave her life willingly in order to achieve this.

Nanako is the spirit of that gun Ciel had in Tsukihime. However, she doesn't make an appearance in human form until Kagetsu Tohya in one of the side stories, Nanako-chan S.O.S. She is also mentioned by Akihiko himself on occasion

The girl with the bathing cap is Miyako Arima. 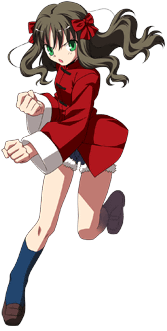 She is Tohno Shiki's cousin as well as step-sister when Shiki was adopted into the Arima family after the incident between him and SHIKI. She's mentioned in Tsukihime and Kagetsu Tohya but she doesn't make an appearance until Melty Blood, generally in the routes involving the Tohno family (as opposed to the routes dealing with Night of Wallachia).

She is also the main character in Hana no Miyako.

6
Which Melty Blood games are relevant, plotwise?
19
Who is Saber extending her hand to in the ED of Carnival Phantasm?
2
What are Arcueid's origin similarities with Caster?
13
Why is it said that the Tsukihime anime "does not exist"?