How similar is Hohenheim (FMA) to the real Hohenheim?

Hohenheim in FMA is based on a real person also named Hohenheim. How similar are the character from anime and the real person, and how do they diverge?

Hohenheim is named after Paracelsus, a man whose name's last portion (at birth) was "von Hohenheim". Paracelsus practiced medicine, alchemy, and other sciences, much like Hohenheim.

In the vein of alchemy, Paracelsus also had a significant similarity to Hohenheim. He claimed to have made a homunculus out of bodily fluids, as described in De homunculis:

Let the semen of a man putrefy by itself in a sealed cucurbite with the highest putrefaction of the venter equinus [horse manure] for forty days, or until it begins at last to live, move, and be agitated, which can easily be seen…If now, after this, it be everyday nourished and fed cautiously and prudently with [an] arcanum of human blood…it becomes, thenceforth, a true and living infant, having all the members of a child that is born from a woman, but much smaller.(1)

Though Hohenheim himself did not make a homunculus, he did contribute the blood that created the Homunculus, Dwarf in the Flask.

There appears to be little beyond these similarities. Paracelsus's personality was polar opposite to Hohenheim's, being stubborn and arrogant to say the least. (This was bad enough to earn him anger and distaste from others in his field.) Paracelsus was never a slave, nor did he challenge a great villain, nor did he have kids. 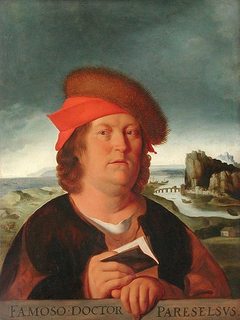 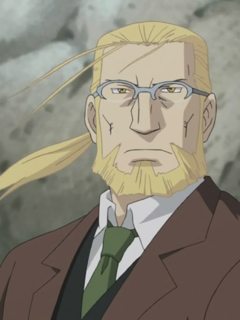 While it's clear that Hohenheim's skills, name, and contributions to alchemy are closely linked with Paracelsus, it's safe to say that little more than that connects him to Hohenheim.

7
How do the Homunculi differ between the FMA manga and anime?
29
How similar is alchemy in FMA to the real alchemy?
6
Is there any alchemy-based transportation in FMA?
7
Why is Pride's name different from the word "pride"?
17
What's the difference between Father, Van Hohenheim, and the main Homunculi?
8
In the 2003 anime FMA, what are the ingredients for making Homunculi?
7
How much are "cens" worth?
6
How/when did Van Hohenheim change his name?
1
Is the timeline messed up in episode 27 of FMA: Brotherhood?
1
Did Hiromu Arakawa have any input on the 2003 FMA?