What does "dog's circle" mean?

I just watched an anime where the phrase dog's circle was used in the English subtitles. The sentence was, "We are the dog's circle." Is that a well known Japanese expression? The anime was episode 6 of Natsume Yujin-Cho 5, where it was used at time mark 20:10. The episode just went up on Crunchyroll this week.

From context, I'm pretty sure it refers to them being a group of friends or allies around one they protect, but not literally surrounding him/her. Checking on both Google and Bing, there appears to be no general English usage of this phrase. Is my interpretation correct, and in Japanese would the phrase be instantly understood?

I'm sure someone can give a better answer than mine, since I have not read or watched the series.

Dog's circle is not a Japanese phrase. Looking at the Japanese wiki article, it mentions an Inu no Kai (犬の会), or Gathering of Dogs. It says it is a drinking club of youkai that would rush to Natsume like a dog for whatever reason he calls them, therefore the "dog" name.

I am assuming the "gathering" part of the title was translated as "circle", which I don't think is a very good translation. Circle is used in Japanese to refer to clubs, like an "anime club", but does not translate over well back to English in that same sense. I think the name should've been capitalized to make it clear it's a proper noun. Still, if they're throwing a term like that around, I would assume it was explained somewhere in the series.

(This "Answer" is actually a reply to @кяαzєя comment to previous answer. I wanted to post a picture and provide full context for the episode he mentions.)

I re-watched season 3 episode 13 (episode 39 on Crunchyroll, which merges the first 3 seasons into a stream of episodes numbered 1 to 39). I really appreciate the pointer. Beginning at time mark 8:29, the group is formed during the following conversation (oY = one-eye yokai, bY = bull yokai, N = Natsume):

(General note for those who don't watch the series -- Natsume avoids calling for help even when he needs it. The only yokai he calls is Madara, his powerful self-appointed bodyguard. But the others do like him and would help.)

Here is a screen-cap from the end of the episode, at the party showing Natsume and the Natsume Dogs: 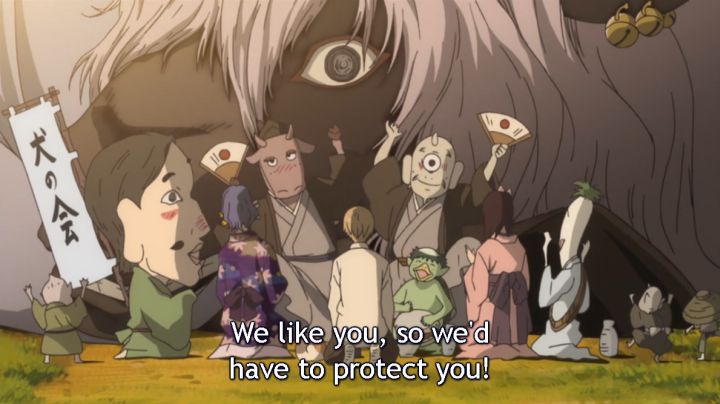 Madara, in his small, Nyanko-sensei, cat form is next to Natsume, can barely be seen from his rear, between the text and next to Natsume. I'm pretty sure the sign being held on the left is the same Japanese which @Jimmy told us was Gathering of Dogs.

So, in summary, I believe my question did post the first usage of the phrase dog's circle, although this group was formed episodes previously as the Natsume Dogs.

I personally think a better translation would be "loyal dog troupe". Not a literal translation, but makes more sense in english.

Not the answer you're looking for? Browse other questions tagged japanese-language natsumes-book-of-friends or ask your own question.

63
What does 'moe' mean?
11
What does "tsukkomi" mean?
9
What does Ni no Kuni mean exactly?
12
What does the phrase "Rokkon Shojo" mean?
2
Is the Japanese well-translated to "kalos" here?
6
Was "defenestrated" simply a literal translation, or part of a bigger concept or joke?
7
What does Midorima Shintarou's "-nanodayou" mean?
18
What does "padoru padoru" mean?
3
What does Onii-Chan mean?
1
What does Ghoul mean in japanese?