Can anyone explain the ending of "Koe no Katachi" one-shot?

In Koe no Katachi (OOIMA Yoshitoki) (one-shot version), at the end of the story,

the boy, Ishida Shouya, finally met up again with the deaf girl he bullied in the past, Nishimiya, Shouko.

My question is about the exchange in sign language between them in the last 3 pages of the story. What do the signs mean?

Why did the boy blush and reply "That's so embarrassing! How can you even say that?!" in page second to last? And in the last page, when the girl grabbed his hand, why did he say "That's not what I meant!"?

The relevant 4 pages. (negative page number, since I am counting from last) 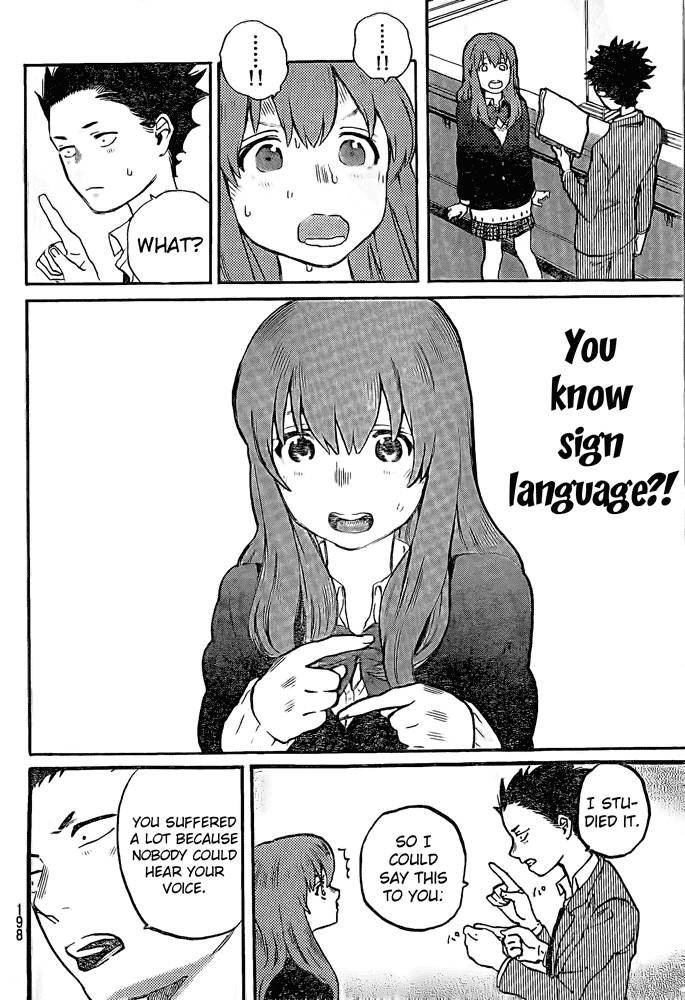 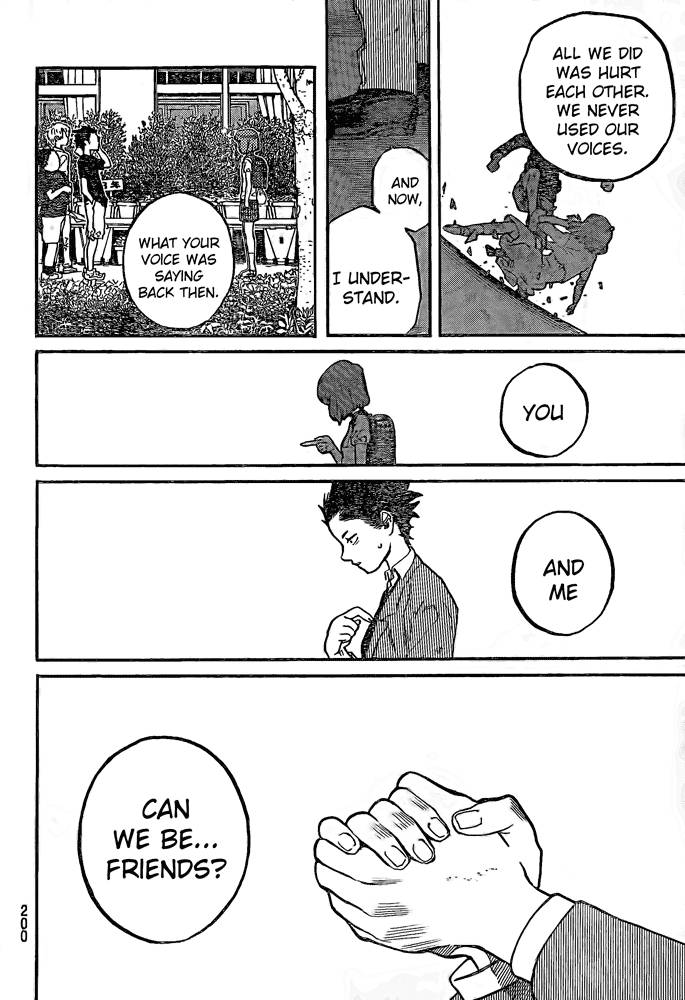 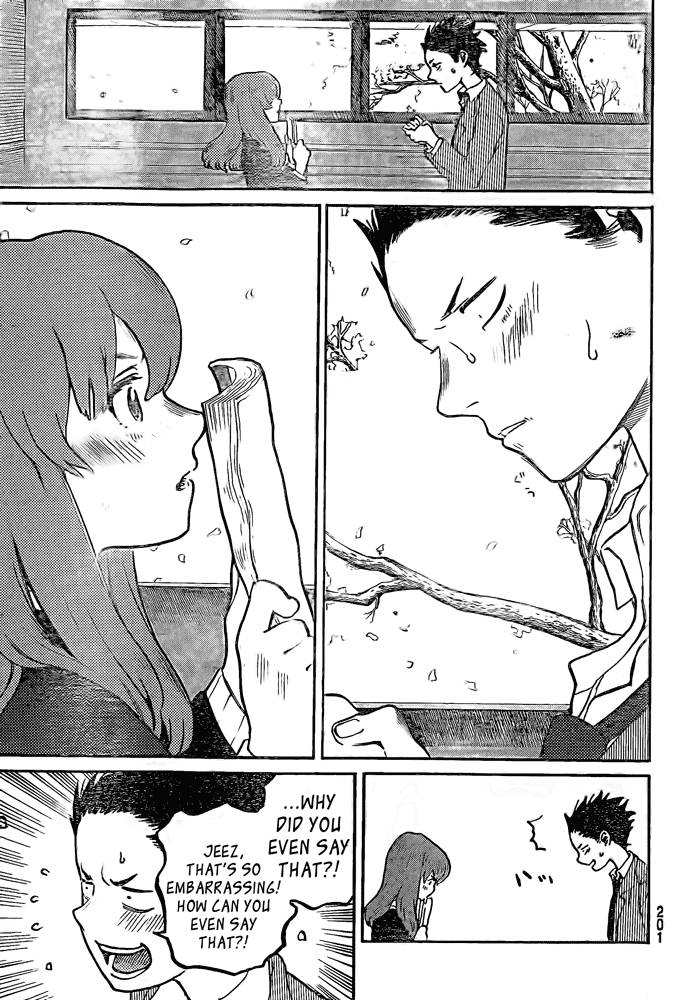 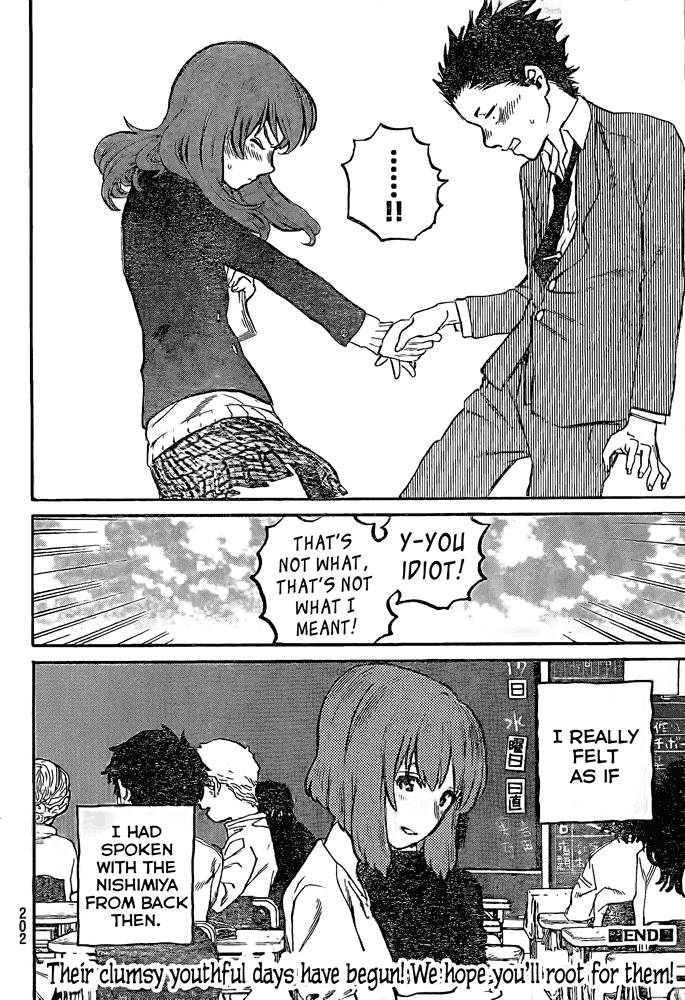 It says "you-me-friend" in JSL. The pronouns appear to be the same as ASL, (finger pointing at the relevant person stands in for you/me/he/she/it) and clasped hands by context appears to mean friend. In ASL, it would be hooked index fingers & clasped hands means "to congratulate".

I didn't see any other panels with likely sign in them. On an unrelated side note, JSL is distinctive for it's usage of air-writing, where some signs like place names are the Kanji written in the air with your finger.

He actually blushed after she had shown him a piece of paper with something written on it, if I remember correctly. So we can only imagine what actually was written here ("I like you", maybe?)

Grabbing one's hand should mean "don't leave me" (it is so in english and russian deaf language).

The I/me/friend part is already answered, and it's correct.

He was repeating what she had hand signed to him when they were in elementary school, "Can we be friends?". Now that he understands what she said at the time his reply to it now was how she could have asked that of him (which he views as embarrassing). Both times she clasped his hand as an agreement or asking for an agreement from him (in elementary).

There's one possibly-relevant translation issue (Japanese -> English, nothing to do with JSL) in the pages @nhahtdh posted that might be confusing people's interpretations of the scene. On Page "-5", Ishida's last line is more like "Not being able to hear your voice made my life difficult." - he's talking about himself, not sympathizing with Nishimiya. On what would be page "-4", he goes onto say that things would've gone better if each of them could hear what the other had to say.

Contra @ssh's answer, there's no reason to suspect that Ishida blushing had anything to do with Nishimiya showing him something on a piece of paper - she'd only just gotten her notebook back from Ishida after 5 years, and we don't see her writing on it.

Why did the boy blush and reply "That's so embarrassing! How can you even say that?!" in page second to last?

Here, Ishida is referring to the scene around pages 26-27 where Nishimiya signs to him "you-me-friend" / "can you and I be friends?". This is a very touchy-feely and generally non-boyish thing to say, which is why Ishida expresses that it would be "so embarrassing" to say something like that (especially given his treatment of her prior).

And in the last page, when the girl grabbed his hand, why did he say "That's not what I meant!"?

As we saw on page "-3", clasping hands indicates "friend" (or, per the text given there, maybe something like "become friends"). By taking Ishida's hand, Nishimiya reaffirmed that she still would, in fact, like to be friends with him. I imagine that Ishida's startled reaction there indicates that he viewed their meeting not as a chance to make up with her and start over, but more of a chance to say "hey, I'm kind-of-but-not-really sorry about what happened back then" - he wasn't expecting Nishimiya to be so congenial to him, I guess.

After being scolded by his teacher for partly ripping off Nishimiya's ear, Ishida was angry with Nishimiya, because she supposedly would have snitched to her parents for bullying. So when they met again at page 24, they didn't really want to talk to her, but instead of being angry for being bullied, Nishimiya apologized. And despite being bullied all the time by Ishida, she still wanted to become friends and get to know each other. So that's when she took Ishida's hand and asked to be friends on page 26-27 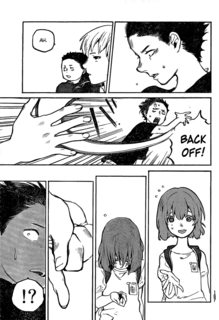 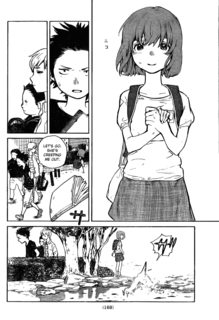 Unable to understand her true intentions, Ishida got upset and threw away her booklet and started bullying her even more severely the following days, until he ended up being bullied himself. After being bullied himself, he couldn't forget about Nishimiya and grew more curious by the day, so he learned sign language. After five years he finally understood what she had been trying to say. She just wanted to be friends after all. 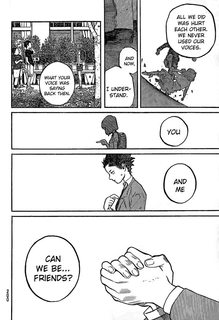 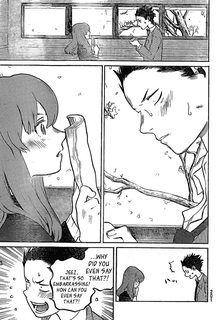 As Senshin mentioned in his answer, grabbing someone's hand and asking to be friends like that isn't a boyish thing to do, especially in elementary school. And on top of that it was rather embarrassing to ask your bully to become friends. That's why he started blushing, remembering the scene from five years earlier.

Ishida was just repeating what Nishimiya had said, but as she still wanted to be friends with him, she took the opportunity to reply to his question by grabbing his hand, telling him she still wanted to be friends. This made him blush even more, because holding hands to confirm friendship is embarrassing and even though he doesn't mind being friends, he didn't pose the question. He just repeated what she had said five years ago. It wasn't supposed to come over as an actual question for friendship.

He's blushing while saying "you, me, friend" or maybe just "can we be friends?" while reminiscing what Shouko said back then. It's after he said all that that he realizes that it was a pretty embarrassing thing to say (culturally, Japanese rarely say something as straightforward as that). The next panel when he says: "Why did you even say that?" is the proof. His rebut "that's not what I meant" is essentially to hide his embarrassment.

Not the answer you're looking for? Browse other questions tagged japanese-language sign-language koe-no-katachi .