How does Jigglypuff not fall asleep from its own song?

Jigglypuff's song is seen to be extremely effective in putting people and Pokemon to sleep, but how does it not fall asleep from its own singing?

Shouldn't it at least fall asleep after it's done? 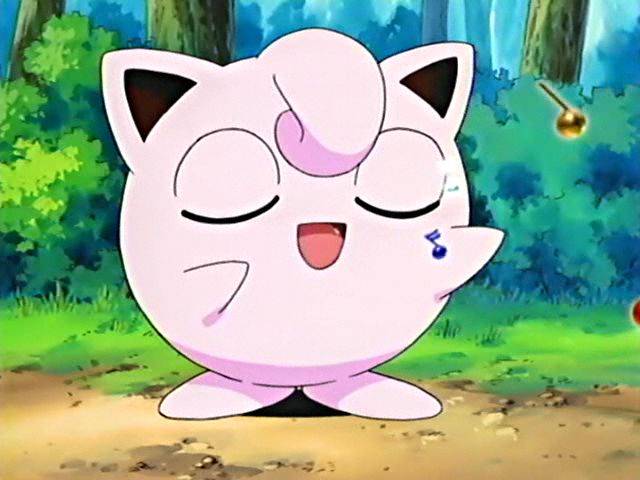 At first: As kuwaly mentioned, normally no one falls asleep while singing a lullaby. That's most likely the reason, but there are other possible points:

I also think I remember other Jigglypuffs falling asleep, too, but I'm not sure. That would mean, that Jigglypuffs aren't immune to the singing, but just aren't affected by their own attack.

This can be answered well with typical concepts of biology. While no species (to the best of my knowledge) is known that can send other individuals to sleep by singing, practically every species produces some kind of natural products that are fatal or unpleasant to others.

Consider, for example, tetrodotoxin known as the poisonous ingredient of pufferfish or fugu. Tetrodotoxin acts by inhibiting nervous sodium channels and thereby inhibits nerve signal transfer. This should affect all higher vertebrates that rely on nervous signaling. It is not produced by the fish itself but by numerous bacterial symbiontic species. They are not the only species to use this toxin as a defence mechanism; among others, so does the rough-skinned newt.

Naturally, it is interesting that all species harbouring these bacteria seem immune to tetrodotoxin. However, even more interesting is the fact that the common garter snake, a natural predator of the rough-skinned newt, has also developped some immunity. This could be traced back to a modification of said sodium channels that render them immune against tetrodotoxin.

A similar mechanism could and should be acting with respect to jigglypuff’s song. Potentially, one could assume that singing was either a method of self-defence (a sleeping predator cannot attack jigglypuff) or an attack method (a sleeping victim cannot run away). In any case, if jigglypuff were able to sing itself to sleep, that would be evolutionarily very unfavourable since it would present an easy target. Therefore, evolution probably selected those jigglypuffs who were able to withstand their own singing (and possibly also those, who enjoyed other jigglypuffs’ singing). This gave them an advantage in survival.

The exact mechanism by which jigglypuffs’ singing does not sing themselves to sleep would have to be researched by pokémon researchers in the pokéworld. However, I present the hypothesis that their nervous system reacts to the stimuli in a different way than other animals, humans and pokémon, possibly due to a different, yet to be discovered signalling molecule mutation.

What I think is that Jigglypuff can't hear itself when it sings. To whoever said you needed to look into its eyes, the Neon City episode in the anime had people falling asleep when they weren't looking into Jigglypuff's eyes. Maybe all Jigglypuff have different songs and ears, so the user of the song can't hear itself sing.

For example, are primarily used to put Other Pokemon to sleep. They have no effect on the Pokemon performing the move(s). Therefore, whenever Jigglypuff is singing, Humans or Pokemon fall asleep. Her singing is primarily a "Status Condition" Move and that's it. If it was meant to be listened to, Humans and Pokemon would be wearing earplugs, so they don't fall asleep. It's even funnier when she stops singing, realizes that everyone's asleep, gets mad and draws on their faces with her microphone/marker.

Actually, Jigglypuff does fall asleep from her own lullaby in this clip.

Perhaps when Jigglypuff sings, the direction and application of it's voice are ONLY directed towards everywhere but itself. I don't think it can't hear itself sing, because in every 1st gen episode it was in, it got mad that everyone fell asleep during its song. If it didn't think it could sing, or couldn't hear it, why would it be so mad? Also, in every 1st gen episode it appears in, it has a microphone that doubles as a marker. You can hear the reverberation of its voice in the Neon City episode, where it used loudspeakers, as well as in every other instance of it singing without loudspeakers. (except that one episode where it was quietly singing to itself as it walked down a road, and even then, if it couldn't hear itself sing, why would it continue singing?) In conclusion, if every time it deliberately sung for an audience, (and not for itself) it put a (hypothetical) sleep frequency in the music that was directed and amplified outward from itself, it would never hear that frequency, thus not falling asleep, but is able to hear its own song.

14
Does a Cubone kill its own mother?
9
Is "Payday" Money, real money?
11
How does one start being a Pokemon Trainer without a Pokemon Professor?
12
Can Poké Balls technically catch humans?
10
Can Pokémon say only what their species is named as, or are they named with the only word they can say?
3
Does Ash walk away from the starting pokemon in the anime?
2
Are items that are gained during evolution part of the Pokemon?