Why does Akiha have a physical reaction to Shiki's collapse?

In chapter 36 of the Tsukihime manga, Akiha doubles over in pain while Shiki is collapsing at the site of the incident eight years ago. The pacing and a remark from Akiha indicating worry for Shiki imply that this is related to Shiki's collapse. 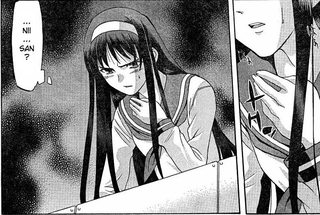 Why would Akiha have a physical reaction to Shiki's collapse? I do not recall seeing any indication of the two being linked physically or mentally in the way Shiki and SHIKI are. (Shiki eventually sees murders from SHIKI's eyes. We don't see Akiha undergo the same experiences as Shiki in this maner.) Alternatively, am I misunderstanding what happens here?

Actually they are. In the visual novel, in Akiha's Route, what really happened when Shiki collpased is revealed. SHIKI inverted and attacked Akiha but Shiki protected her and died; however, Akiha gave up some of her life force to save Shiki.

She was outside playing with Shiki, her adopted brother, and her real brother, also named SHIKI. But the Tohno blood was much stronger in her real brother and he inverted to his non-human form. In this uncontrollable state, he lost control of himself and attempted to attack Akiha. Shiki jumped in the way to protect her and took the full force of the attack. Shiki died protecting Akiha, but Akiha used powers granted to her by her non-human blood to give him half of her life, allowing him to survive.

Akiha's pained expression is most likely from the strain of maintaining Shiki's life alongside resisting the Inversion Impulse of the Tohno Demon Blood inside her, which she requires Kohaku's help for.

Akiha often struggles to maintain control over her Tohno blood and resisting her Inversion Impulse, which she has difficulty with due to her also maintaining Shiki's life, to the point she also had to drink Kohaku’s blood.

In her route however, it becomes too much as she succumbs to her Inversion Impulse in the end. In the True End of her route:

[Shiki] decides to kill himself instead (so that she will regain the life energy she gave Shiki when he died eight years ago, and then will be restored to her full strength so she can more easily resist her Tohno blood impulses and restore her mind).

Suffice to say that there is more to the True Ending than what I have quoted, which you can read up on the site in the quoted paragraphs and those that follow.

Not the answer you're looking for? Browse other questions tagged tsukihime .

5
What territory would the Aozaki Clan have?
5
Does the name Shiki have some sort of relevance to Death?
5
Why is Roa's appearance in the Hisui route different from that in "Near Side of the Moon"?
2
Why is Kischur Zelretch Schweinorg both a Dead Apostle Ancestor and Wizard Marshall of the Mage's Association?
13
Why is it said that the Tsukihime anime "does not exist"?