How did Zeref become dormant?

In season 4 episode 102, the two enemies Gajeel fought talked to Erza about Zeref being in a "dormant" state or that he was technically "asleep".

What happened to make him this way?

They were wrong. He wasn't dormant/asleep, he just was busy elsewhere and wanted himself cut off from Humanity. Since he didn't interact with humanity but his deeds were legends, Grimoire Heart assumed he was dormant because of no news of any activity.

This is revealed by Zeref himself at the end of the Arc. This is what he says in Chapter 250 of Manga. 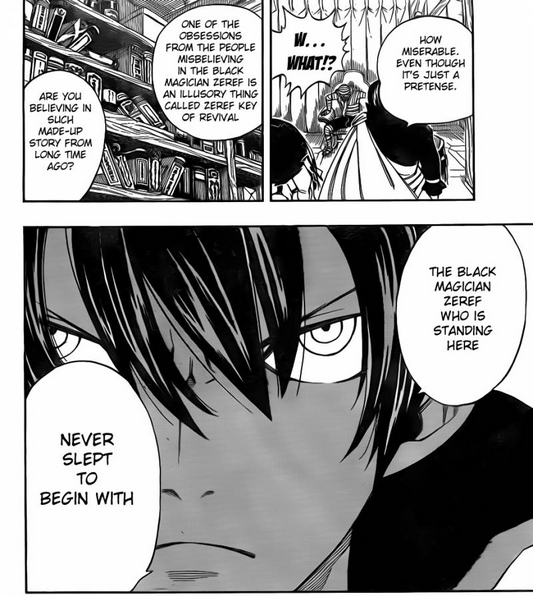 At the end of the war, an enraged Zeref sneaks aboard the Grimoire Heart airship and confronts the remainder of the Seven Kin of Purgatory, including their Guild Master, Hades, about the horror they have brought upon the world. While there, Zeref reveals that he was never "asleep", but, rather, he was always "awake". He also reveals that when he understands the weight of human life, his cursed body will eliminate his surroundings; but when he forgets about it, he is able to fully control his terrible Magic. He blames Grimoire Heart for the summoning of Acnologia, claiming that it will now end the current era. He then tells the group to repent for their unforgivable sins and casts a spell on Hades

What he was doing while he was "awake" can be covered in a detailed answer which will contain spoilers from Fairy Tail: Zero and the "Alwarez Empire" Arc.

5
Was Erza's nickname 'Titania' inspired by Shakespeare?
1
Why is being a Dragon Slayer a big deal?
8
Did Ultear know there was a different way to defeat master Hades?
6
Why was Jellal Fernandes blindfolded?
2
Can Natsu Dragneel use Dragonforce and Lightning flame Dragon mode at the same time?
3
How are Natsu and Zeref related?
0
Zeref Darkness Technique?
2
What was Natsu dreaming about in Lucy's room?
0
For the 2nd movie of Fairy Tail: Dragon Cry, at what moment is it placed?