Why aren't most of the phones in anime smartphones?

Several Reddit posts also agree that flip phones are more popular. Why are flip phones still so popular, (if you can endeavor to answer) in both society and anime/manga?

Smartphone adoption in Japan is hugely up between 2013 and now, and even more so between 2011 and now. According to the CIAJ (as cited in a whitepaper titled "Japan’s Smartphone Surge and Its Impact on the Mobile Marketplace"), smartphone penetration in the Japanese market was a mere 9% in 2011, rising to 39% in 2013, and skyrocketing to 84% in 2016. 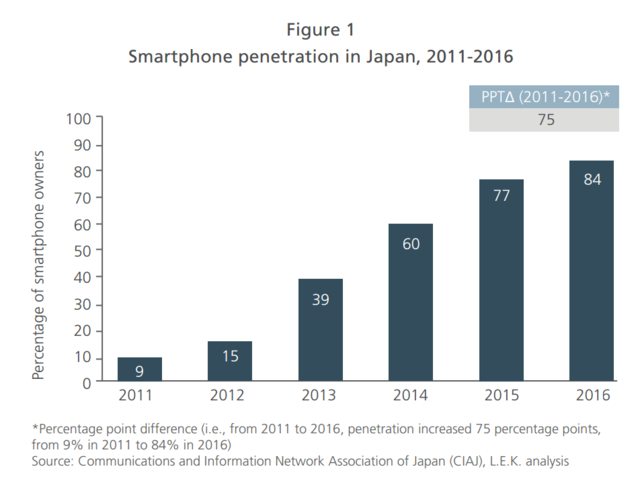 Is it any wonder, then, that anime set in "the present" that aren't from the past year or two would tend to have more non-smartphones ("feature phones", as they're called) than smartphones?

(I specify "the present" because we should exclude from discussion any shows set in the future. They tend to have fanciful notions of how telecommunications would work that don't tend to involve feature phones or what we would consider "smartphones".)

I doubt it is a substantial effect, though. Any animated production involves multiple people with creative input (not just the author of the source material), and I would imagine that at least some of them would know what kind of technology youngsters use.

Best Korea is proud of the way you confirm your priors.

Why are flip phones still so popular, (if you can endeavor to answer) in both society and anime/manga?

The article @Maroon linked in the comments is a good overview of why smartphones were not common in Japan (prior to 2014 or so).

11
In what year(s) does the Monogatari series take place?