How did Shanks manage to stop Kaido?

I know it sounds funny, but how on earth Shanks stopped Kaido to enter and follow Whitebeard on Marineford war?

All we really know about Shanks and Kaido's skirmish is in these 2 Panels. 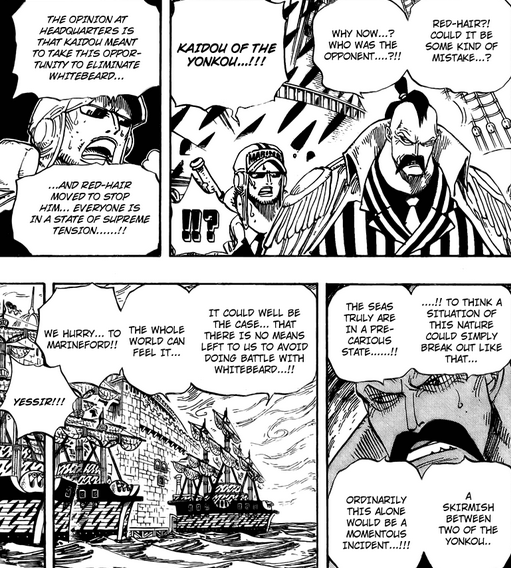 Anything said other than the information is merely speculation. However it is not completely unfounded.

Looking at the second panel, Shanks appears at Marineford just a day after his skirmish, with his crew and ship showing no signs of damage or a fight. Considering, what happened to Marineford when Yonko Whitebeard fought we can safely assume that whatever fight, if it took place was likely very minor. More plausible is, Shanks simply being there "stopped" Kaido. Consider the following scenario.

The fight between Whitebeard and World Government threatened to disrupt the balance between the Yonko. Kaido tried to use this opportunately to preemptively strike at his enemy while he is distracted. Neither Whitebeard nor WG can afford war on two fronts. Whitebeard couldn't waste time and resources to thwart Kaido while WG didn't engage Rayleigh (Kizaru said something like do you want to fight 2 legends iirc)

Thus Shanks being a fellow Yonko just simply appeared there and stopped Kaido. Kaido doesn't want to fight other Yonko's head on either. The balance exists because they are all evenly matched. Thus the scuffle between Shanks and Kaido was likely very minor. Seeing that Kaido will not allow him to attack Whitebeard, Kaido retreated while Shanks followed Whitebeard to Marineford.

An interesting parallel to real world, Is Indo-Pak war in 1971. From WIkipedia: Task Force 74

The US Task Force 74 was a US Navy task force of the United States Seventh Fleet that was deployed to the Bay of Bengal by Nixon administration in December 1971, at the height of the 1971 Indo-Pakistani War. Led by the Aircraft carrier USS Enterprise, the deployment of the task force was seen as a show of force by USA in support of the beleaguered West Pakistani forces. [..]

To counter this, On 6 and 13 December 1971, the Soviet Navy dispatched two groups of cruisers and destroyers and a submarine armed with nuclear missiles from Vladivostok; they trailed US Task Force 74 into the Indian Ocean from 18 December 1971 until 7 January 1972. The Soviets also had a nuclear submarine to help ward off the threat posed by USS Enterprise task force in the Indian Ocean

Thus without fighting, both US and USSR effectively negated each other's influence on the war. For a more detailed account: 1971 War: How Russia sank Nixon’s gunboat diplomacy

this is my own opinion based on my own search and theories :

shanks is based on chancai a.k.a red boy from the novel "journey to the west".the name itself shanks reflect a combination between chancai and "truks" from dragon ball z. in the same novel a character known as "demon lord" heavily influenced the making of kaido's character along side with the Mongolian emperor kaidu, and he is chancai's father.

so how did shanks stop kaido? he probably cut a deal with his old man :)

6
Is Shanks that strong?
10
Is Dracule Mihawk really the strongest swordsman?
5
Why does Kaido want to kill Whitebeard?
6
What is Shanks' sword made of?
3
Does Kaido possess any other power other than just being physically strong?
4
Why is Big Mom afraid of Shanks?
3
How Shanks and his crew were able to survive a clash with Kaido pirates?
0
Who were the previous “Emperors of the Sea”
2
What happened in the battle between Shanks and The King of Beasts
3
What is Shanks relationship with the Gorosei