This question will seem a bit weird so I'll give a bit of background.

So naturally when a new title pops up on here, MAL, from friends or whatever I promptly Google it to see if it's something I'd like or not.

Is there a way to infer a target audience from analyzing the content of the first episode?

What I mean is if there are tell tale signs of each genre (ex. Supernatural, romance, sports) and demographic(ex. Shonen, seinen, shojo, josei etc.) that seasoned anime fans look for that allow you to know the genre and demographic without prior research?

If there is a viewing style or technique involved I'd like to know it.

Furigana are those small Japanese characters that can appear over kanji characters in order to provide their pronunciation to readers who might not be familiar with the kanji or there use in that context. They can appear even works targeted at adults if the kanji is very unusual or the author's intended pronunciation is non-standard, but mainly the appear in works targeted to children. I'm not entirely sure what age the cut off is, but a show targeted at younger teens is probably going to use furigana while a show targeted at older teens probably won't. Apparently this has changed over time and current works targeted at teens are more likely to use furigana than older works with the same demographics.

In an anime show the place to look for furigana is things like the titles, eye catches, subtitled opening or closing song lyrics and any Japanese subtitles of foreign language dialog. The credits won't normally have furigana, being essentially aimed at adults working in the industry.

For example despite the fact the characters in Wooser's Hand to Mouth Life all look they were designed by Sanrio, the lack of any furigana in the show's title screen suggests an older target demographic: 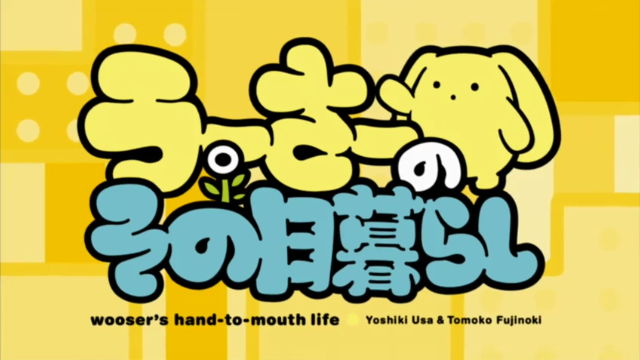 This is supported by the fact the show originally aired on TV in Japan at 1:35 AM in the morning.

While anime series often try to target a broader audience than the original source material (if any) that their based on they rarely try to target a completely different demographic. In the case of anime series based on printed manga it's usually not too hard to find out what magazine the manga was originally published in. Most manga magazines have a entry on the English Wikipedia which gives the target demographic of that magazine. Sure it requires a bit "previous research" but it usually requires no more work than finding the Wikipedia page for the anime and clicking one or two times.

As far as genre does I don't think it possible to come with any good rules to determine the genre of a show by watching it. Sure it's not hard to categorize a show after viewing 15 minutes of it, but codifying that process would be well beyond what can be answered here and not all the useful. Genres are basically just piles we place shows in order to provide some sort of organization. They're sections in a video store. A show has to go on some shelf, but not every store is going to make the same determinations of where. And at the edges it's not always possible to say whether a given categorization was right or wrong.

Another problem complicating determining genres is that Western genres are often different the Japanese genres, and anime fandom has created its own genres distinct from either. For example "slice-of-life" is an anime genre that doesn't have direct translation into Japanese and differs the older Western meaning.