Why is it (almost) always a 10 years gap? What is so special with 10 years intervals?

It seems there is something special in anime and manga about 10 years gaps. They seem to me that they will become a different person in 10 years.

Yes, I know people age and a decade is a long time. I can think of the me 10 years ago, and he was something of a mess.

I am sure I've seen other 10 years intervals in other titles, the list could go on and on.

What is so magical about the 10 year gap?

This question reminds me of a typical case of Confirmation Bias.

Confirmation bias is the tendency to search for, interpret, favor, and recall information in a way that confirms one's preexisting beliefs or hypotheses, while giving disproportionately less consideration to alternative possibilities.

We all see a pattern in everything and try to rationalize new information to fit in our current hypothesis. OP's comment is in perfectly in line with this.

I really got past the up/down vote angst phase. I will keep adding more and more references of 10 year gaps as I find / remember them.

I've already put this in comment, but wanted to write a more complete and coherent answer. No, there is nothing special about the 10 year gap/interval and its increased usage can be attributed to some of the other factors that make the number 10 appealing. Such as

Probably because it's a nice round number and because the protagonists of anime are so often teenagers. You can show some event that shaped their lives happening when they were 6 or 7, then go forward 10 years to when they're 16 or 17, right in that magical anime protagonist age range. Plus it's long enough for the characters to have changed dramatically in the intervening time, especially given their youth; a person will be very different at 7, 17, and 27, but not so dramatically different at 27, 37, and 47 - Torisuda

It gives an optimum room for character development while also being an easy number to deal with. As I also mentioned systems such as metric system and Decimal system were adopted just because of their "ease of use". Though there don't seem to be that many advantages of choosing the "10 year interval". But if we look at a more broader sample, we see that the "10 year" is not THAT common.

The sample I chose is TV Tropes - Time Skip, Anime and Manga It has a total of 56 entries. But some series have multiple smaller time skips as well. Since I compiled this list pretty quickly, please feel free to point out any mistakes! 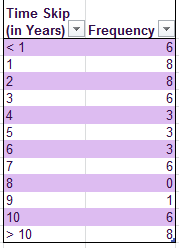 This is as I expected!! Smaller timeskips are more because of multiple in a single series, while larger are rarer but still quite spread out.

Dragon Ball and Dragon Ball Z had a number of time skips during its run. This happened after every major story arc. The original manga ran for eleven years, with about three times that amount passing in-story. This amounted to no less than seven time-skips lasting a year or more. The most notable was the five year gap between the end of the 23rd Tenkaichi Budoukai and the arrival of Raditz (which marked the end of the first Dragon Ball anime series and the beginning of the more sci-fi oriented Dragon Ball Z), and the seven year skip back into a more comedic (but still dramatic) tone between the Cell and Majin Buu arcs. The finale itself was ten years after the Buu arc.

In fact, I can easily make a case for a "special 7-year gap".

9
Why are Ringo-chan's cheeks always red?
9
Why does Super Sonico always wear headphones?
2
What do vampires have to do with the phase of the moon?
21
Why do almost all anime series have a "going to the beach" episode?
11
Why is it that almost every anime I watch is about School kids?
4
Why do anime end with spoilers?
6
Why always "skirt-flipping" fan-service's (mini-skirt blowing up.)?
5
What does "crossing one's palm with fingers and gulping" signify?
1
Why do anime villains always wait for the whole duration of whatever character is giving the speech before attacking?