Why does Tetsuo say "I am Tetsuo" at the end of Akira?

At the end of Akira, there is a massive power release; then:

Tetsuo manages to gain full control over his powers, and these abilities end up creating a new Big Bang in another dimension.

After this event, Tetsuo says the following: "I am Tetsuo." 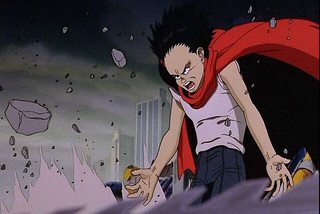 Why did he say this? What meaning does it have?

Testuo (probably like Akira before him) finally gains full control of his powers, and uses it to initiate the creation of a new universe. In effect he is now the creator god of this new universe, and he proclaims this at the end:

This is the real Tetsuo, he is saying. His essence without the limiting shell of his mortal body. The pure energy of his being distilled into a pocket universe.

I think I may disagree a little here, since one of the main themes of the film is evolution and the main subtext is about puberty, (Tetsuo being unable to "control his body" and his inability to "ride Kaneda's bike") I think Tetsuo simply reached the next step in our plane of existence. Like Akira, Tetsuo has accepted his role as a superior being; however, since he is aware of the damage that he creates (told through dream sequences, and Kaneda's exploration of his psyche), he is also partly human. He is aware of any and all change around him, including the change within himself. He undergoes a total metamorphosis, completing his evolutionary destiny. By recognizing that he is a supreme being with mortal qualities, he comes to accept himself thus his statement, that he's neither the experiment known as #41, nor is he the resentful boy, he is and has always been, Tetsuo.

"I am Tetsuo" is a great and memorable line, but albeit a tricky one to decipher. I believe the intent is to serve two points to the audience, anything further might be reading too much into it.

The first point serves to inform to the user that Tetsuo is still "alive" (as in he' still out there), but not necessarily in a physical sense. The second point serves to point out to the audience the individual entity know as "Tetsuo" still exists. Not as part of Akira or as a new merged entity, but as Tetsuo in one form or another.

Though this doesn't necessarily doesn't explain or foreshadows anything, it's a reminder to the audience that somewhere in the vastness of space of that world... Tetsuo is out there.

It is due to he and Akira moving on to another plane of reality and creating a new universe. This directly correlates to the ending of the manga when Kaneda is trapped inside the energy wave as Akira engulfs Tetsuo to keep him from getting too out of control. Those pages talk about the initial genetic testing on humans which led the test subjects towards a new step in evolution. The conclusion being the possibility of creating a new universe via the powers granted through genetic manipulation and high doses of experimental drugs over subsequent generations of test subjects. Ultimately, the power talked about in both the film and the comic is "the power". It is the power that drives physics, chemistry, and all of life. It is the power to both create and destroy.

I do not negate or confirm whether he has created a new universe or just come to terms with his pubescent angst... I would say it is just as likely that he is merely coming to terms with death? But, what is the difference? That is the beauty of the story. It could be all three... I mean, creating a new universe and now becoming its god, that's insane. Not to say impossible, but in our view it would be the same as death.

I am curious about the puberty undertones, I can see that but I have to say undertone, no more. I feel that Akira is social commentary at it's peak and puberty may be a theme, but not the main one. I like the idea of a new universe but I feel that it is not obviously stated. Yet I cannot deny that it is a great analysis of the ending. So, having never read the manga, because I am a cheap jerk or whatever, I feel that Tetsuo dies. He dies, only in our eyes. It is a perfect ending. We do not know what comes after death, and I agree the theme is about the Star Child, human evolution, 2001 Space Odyssey, etc. So all these interpretations are essentially the same ending. AMAZING. I don't know. AKIRA! Every time I watch it I am blown away. Tears. Amazed. Or as Kei said, "Fantastic."

I believe that Tetsuo had created a new world to inhabit as a higher power and not in a firey passion but in a benevolent society. Perhaps he had just said I am Tetsuo to to hint at his conciouaness thrives on.

JustinJustin
1
Add a comment  |
Highly active question. Earn 10 reputation (not counting the association bonus) in order to answer this question. The reputation requirement helps protect this question from spam and non-answer activity.

15
How different are the manga and movie versions of Akira?
21
Is Akira the only anime produced in 24fps?
7
Why is K9999 almost identical to Tetsuo Shima?
11
Were Judeo-Christian religious references part of the "Akira" movie's original dialogue?
6
Why did the esper children attack Tetsuo with the toys?