Why didn't Kabuto resurrect Jiraiya during the Great War?

During the Great War, Kabuto resurrects a lot of very, very powerful shinobi (Madara or Hashirama the 1st, e.g.). However, he doesn't bring someone as powerful and impactful as Jiraiya.

My girlfriend pointed this out a few days ago and since now, I wasn't able to find a reason. I see that this Edo Tensei no Jutsu brings up some questions (about more Uchiha's or even Orochimaru) on the table, but it seems that everyone forgot Jiraiya in this equation.

Why didn't Kabuto resurrect Jiraiya during the Great War?

Actually, this case of Jiraiya's resurrection had been brought up by Kabuto while discussing the secrets of the Edo Tensei with Obito. He had also mentioned about Shisui Uchiha.

The reason as to why Jiraiya couldn't be revived according to Naruto Wikia:

When the Fourth Shinobi World War starts, Kabuto Yakushi expresses interest in reincarnating Jiraiya to have him fight for Akatsuki, but unfortunately is unable to reach him as his body rests in the lower depths of the sea.

But in the manga, Kabuto expresses that he could obtain enough DNA (to revive Jiraiya) from the weapons used by the Paths in their fight against Jiraiya. But Obito comments not to push his luck, as reviving Jiraiya, as well as Shisui, could be overkill. 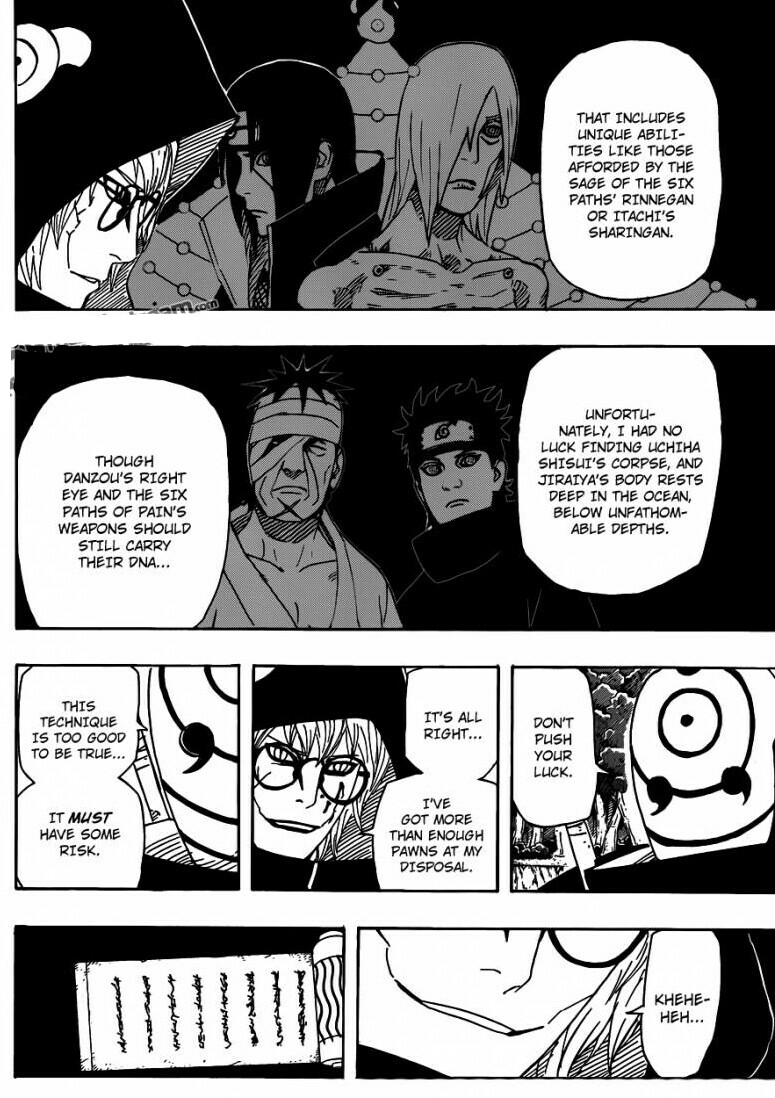 There was not much left of him.

When Tsunade was explaining the circumstances to Naruto when he returned from a mission, he wanted to bring the body back. However, because of Konans' explosion jutsu and the dangers of going to retrieve it and the boiling oil jutsu he himself used, there wasn't much left to salvage and bring back to the Hidden Leaf.

Kabuto would have had even less time as the remains were decomposing by the time he realized Jiraya was indeed dead.

The anime episode that refers to why Jiraiya Sensei couldn't be used for the reanimation, is episode 264 of Shippuden, in season 5. The explanation of starts around 17 minutes of the episode.

-1
Why wasn't Jiraya reincarnated?
5
Why is there no reanimated Uchiha fighting in fourth shinobi war?
2
Why didn't/couldn't Kabuto bring Orochimaru back?