What are the orange stripes and fire that Eren's Titan body gets when fighting the female Titan for the second time?

In the second fight with the female Titan, at the end, Eren's Titan gets some orange lines and fire. What is that? Is it some special power particular to his Titan just like the female Titan can harden part of her body when fighting? 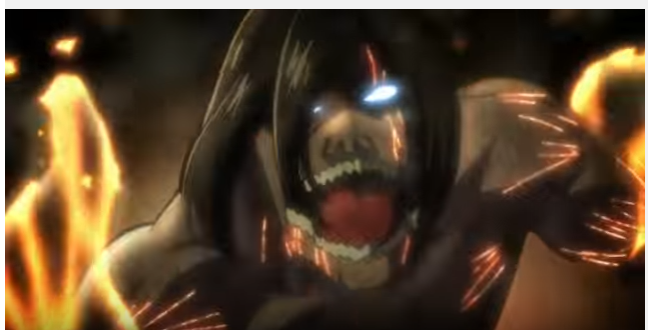 I believe it's heat from the extreme regeneration he's undergoing. Normal Titans emit steam from wounds as they heal; it makes sense that accelerated healing might emit more heat to the point of glowing. (From a chemistry/biology standpoint this could be seen as a waste of chemical energy, but we're talking about a person who can summon a lightning bolt by biting his hand and somehow use it to grow a fifteen-meter body around himself!)

I think he has orange strips and fire is because titan's body temp. is higher than normal and the attack titan's body temp. increases the more angrier he is... u might say that he's been more pissed later on in the series but this is the first time eren let go and the first time accepted the fact that annie was a bitch and evil.. causing him to go postal and his skin starts to burn... its not anime exaggeration because annie noticed the fire and was scared... i mean she was terrified or its because his regeneration was accelerating. titans emit steam when healing so accelerated healing would probably emit fire, maybe thats why some of his muscle stands were glowing orange.. its not like titan cant emit fire.. rod reiss' and bertholdt' colossus titan were soo hot that their surround caught fire.

I agree with DaniellYancey in the fact that it's due to the extreme regeneration he's going through. The lose of his left arm and right left as well with being stabbed through the abdomen when he was punchered straight through the abdomen. I would also propose the idea that due to his extreme rage level against Annie, perhaps this also factored into the conclusion?

Remember when Reiner rammed one of the gates, it generated a lot of body energy which is why he breathed out steam as normal humans would in the same situation but only visible when in a colder climate. The same with the colossal titan, it requires a constant amount of energy which explains the large amounts of steam and short transformation duration.

18
How did the Female Titan cut Eren's titan form?
4
How did the Female Titan manage to get out of her titan form and escape while surrounded by a horde of titans?
10
Where is Eren's father Dr. Jaeger?
6
Is Eren Jaeger considered a Rogue Titan or an Attack Titan?
2
Doesn't Female Titan and Beast Titan have the Coordinate ability?
4
Why didn't Annie take Eren out of his Titan when she kicked and beat him in the head during their fight in Stohess?
4
Why didn't Eren Yeager saw the Key before in Attack on Titans?
4
If Eren Jaeger dies without transfering his titan powers, will both powers transfer to the same child?
6
How can Levi be so fast when approaching the Beast Titan's nape in season 3 part 2?
1
Why didn't Marcel or Frieda Reiss transform when being eaten?