Where did Asuka think "Monaka" came from?

In the bonus episode, the group of players who don't make the cut to play in the competition form a B-Squad named Monaka, after the first character of their three second-year members' names.

When they announce this name to the rest of the club, Asuka misunderstands and thinks the name has something to do with youth: 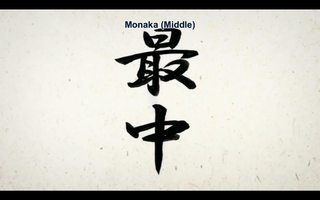 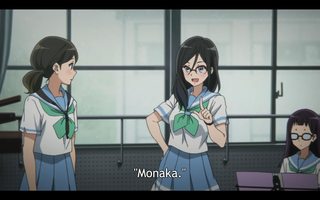 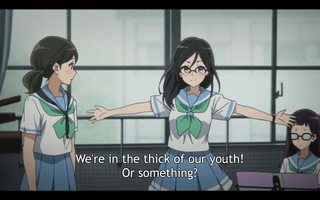 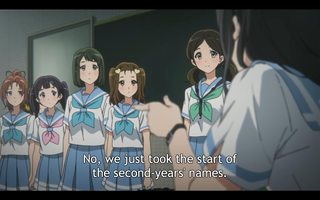 Asuka: "Monaka". We're in the thick of our youth! Or something.
Girl: No, we just took the start of the second-years' names.

Where did Asuka think they had gotten the name "Monaka" from?

Here is what Asuka said in Japanese:

I see... monaka. We're in the middle of our youth~ or something?

The idea is, 最中 (in the middle) is usually read as "saichuu", but also has another reading of "monaka". As for why Asuka connected it to "youth", it's a common idea that school life is related to youth life.

Monaka itself is actually a wafer cake filled with the bean jam. The origin of monaka is from 最中【もなか】の月【つき】 which has the meaning of "the shape of full moon".

Not the answer you're looking for? Browse other questions tagged japanese-language hibike-euphonium or ask your own question.

17
Where did "dattebayo" come from?
26
Where does the word "Nyanpasu" come from?
7
Where can I get the sheet music for the song Crescent Moon Dance?
3
Where did it become known that Rin's and Len's names have different first letters?
1
What does Hondo Eisuke mean when he says, "I think I stood up on the wrong leg as a child."
6
Where can we find dialogues related to anime?
0
What does genki (from genki dama) means?
2
So, where does Grandma work?
1
Where does the phrase ecchi sketchy one touchy come from?
2
Why do people think people with Good Knife Skills are hiding things?