Sword Art Online - is Offline season 2 included in the DVD?

As seen in this question, there are 18 episodes of Sword Art Offline in total, 9 for each season.

In the DVD product shown here on eBay, the back of the DVD case says it includes seasons 1 and 2 (dub), along with Extra Edition 1-9 (dub) and Offline 1-9 (sub). 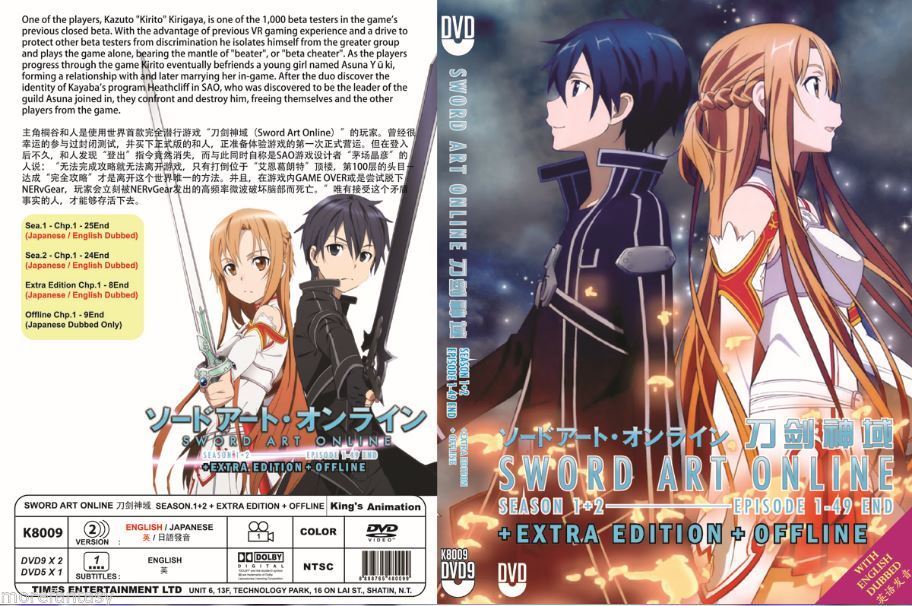 I'm wondering if episodes 1-9 of SAO Offline season 2 are included, since the case isn't clear on that.

I would suspect that the DVDs, like the Bluray I own, would normally come with them, however I suspect what you have there on eBay are bootlegs.

How can I help stop DVD Piracy?

There has been a recent increase in these DVD sets being spotted and these are most certainly not real products but rather an illegal bootleg copy, usually imported from South East Asian countries and contain extremely bad subtitles and are of low quality. Easy signs to tell if they are real or not include:

Should you come across any of these products do not purchase them and if you feel this isn't right report it to the authorities or to piracy@madman.com.au, please include the store's name and if possible get details of the distributor, the closer we get to the source of the problem, the eaiser it is for us to stop the flow. The Pirate Anime FAQ site also has a lot more useful information regarding these illegal bootleg DVDs as well as other knock off anime merchandise and how you can avoid them. Alternatively you can also report it to the newly setup Anti-piracy task force. Remember the more reports that are reported the more likely something will be done about this problem. Piracy hurts the industry and you can help by spreading the word and reporting these illegitimate practices.

Now the eBay ad is saying that it has 49 episodes + EX + Offline on 3 disks. The Sword Art Online DVD 1 On Rightstuf is 1 out of 4 for just season 1 and it says

The Bluray I own had 2 Bluray Disks and the 7 episodes were spread across both along with an episode or 2 of Sword Art Offline on each disk. There were 4 Bluray Collectors Editions Each Season and 1 for Sword Art Online EX (which was single disk) so in total there were about 17 disks ((2 x (4 x 2)) + 1). DVDs have a lower capacity than Blurays so they wouldn't use less disks.

Comparing this to what Madman has put on their website this leads me to believe that what you have is a bootleg.

Another problem with the cover is that it doesn't state which DVD Region they are and if you're buying a legit DVD you need to know this so you can either get a DVD Player which plays that region, can be set to be a different region or set to Region 0 which ignores it (that's what my DVD/Bluray Player is set for DVDs. Bluray there is no Region 0).

Also while the eBay ad says

take this with a grain of salt. I got Magical Girl Lyrical Nanoha on eBay which came with Season 1-3 and the 2 movies on 5 disks. It had a Hologram yet the episodes were clearly fan subs someone downloaded and burned onto a disk with whatever art they could find for menu backgrounds (since one used character cutouts but did a poor job removing the white around the character, blurring the edges to try and cover it up).

5
After what episode was each Sword Art Offline episode expected to be viewed?