Why is Smith's wall clock open at night?

Episode 13 of March Comes in Like a Lion includes an extended sequence focused on the side character named "Smith". At around time mark 4:20 we see him get up in the morning and go through some of his morning ritual. One of the things he does is close the door on the face of his wall clock. 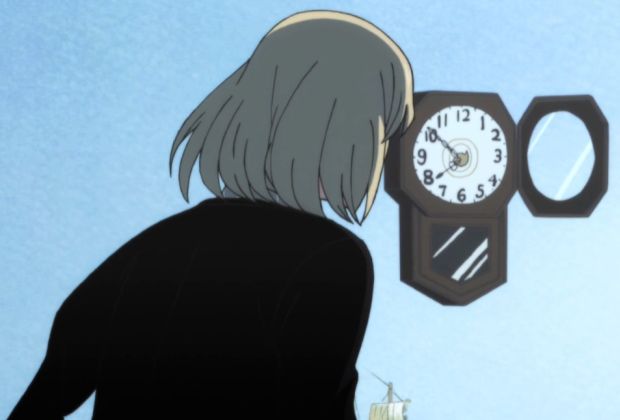 Does anyone know why the door is even open? I saw no context concerning this. He gets out of bed and closes the clock door -- that's it, apparently very routine. Is leaving a wall clock door open something that a Japanese person could relate to? His morning routine is quirky and a bit funny. Maybe this is just part of Smith's own quirkiness.

This may or may not be significant -- I did not fully understand what they were saying, but I've read two comments to YouTube reviews of this series that implied that the sequence of him eating breakfast was a parody from an old Japanese series. (They didn't say live action or anime.) They only referred to the breakfast-eating, which occurred after, and did not mention anything about a clock.

I just watched episode 14, and then a review of it. The reviewer provided a link to a 2-minute side-by-side comparison of Smith's breakfast and the live action drama it was parodying. It was funny and included the original guy getting up and closing the face of his wall clock. My question doesn't go away, though. Is there something Japanese people can relate to in getting out of bed and shutting the door of your wall clock?

If it matters, the original drama is called Kizu darake no tenshi (1974). The music in the video switches from the drama to the anime and back. A speaker symbol will be below the source of the music currently playing.

Browse other questions tagged march-comes-in-like-a-lion or ask your own question.