What are the markings used above some song lyrics?

I believe lyrics are shown to both the first opening and ending songs of the tennis anime, Baby Steps. Here is a partial shot from the ending: 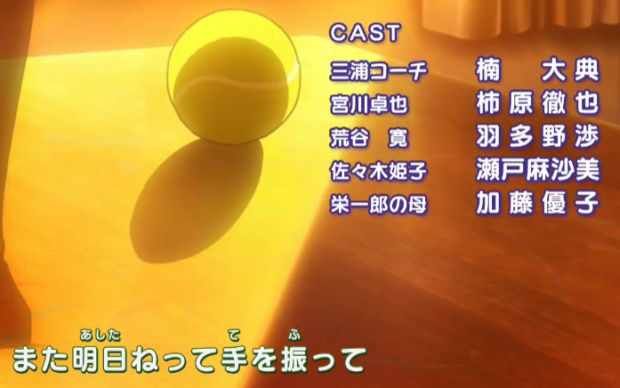 You can see that the normal credits are single rows of characters. However, the lyrics at the bottom include a row of a few mini-characters above the main ones. What do these additional markings (characters?) indicate? I am not asking for a translation, just what their purpose is.

I vaguely remember seeing them in another series or two, but this is the first time they really caught my curiosity. I'm assuming right now that they are related to the music, perhaps how the song may have modified pronunciation of certain words. It appears too sparse to be some sort of full musical notation. There is only one voice in each song, so it is not the simultaneous words of a second singer.

In the English Wikipedia there is an article called Shakuhachi Musical Notation related to Japanese music. It did not seem to help, though I don't know much about the topic. (I.e. I didn't see any pictures showing the double-row lyric thing.)

The markings above the kanji are furigana, which indicate the pronunciation of the respective characters. I'm not an expert, but I recall seeing this (sometimes for all kanji, sometimes only for some) in karaoke-related videos on YouTube before. (Examples: 北酒場, for some kanji; 長崎の女, where significantly, 女 is read as ひと.) Wikipedia singles karaoke as a notable case in which furigana appears, and it makes sense that furigana may be provided for some songs even when they're not explicitly made for the purpose of karaoke (for instance, for a children's show where viewers might sing along).

Not the answer you're looking for? Browse other questions tagged japanese-language baby-steps or ask your own question.

13
Why is it that some anime use language exclusive to the Yakuza?
11
What is the significance of the lottery box in Yuru Yuri Nachuyachumi! OVA? And why are some of the words crossed out?
11
What are the “Angels” called in the original Japanese version?
5
What does this katakana above Black Star's autograph say in episode 2 of Soul Eater?
7
Why are only some of the characters “color-coded”?
2
What are the poltergeists whispering in Episode 11?
1
What is this symbol called which is used to denote “II” in the second season of “The Quintessential Quintuplets”?
1
Are some unusual honorifics used in Shougeki no Soma actually used in regional dialects?