Hilarious, but is it a “burger”?

The team is eating breakfast at cycling camp in Yowamush Pedal episode 13, beginning at about time mark 2:45. We see the MC Onoda eating: 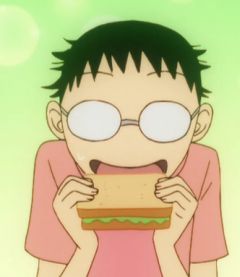 One of his third year senpai, Tadokoro, sees this, and isn't having it:

Hey now! What are you eating?!
Is that a snack? It's so little!
You have to eat more!
You'll drop out after the second day!
I'll share my Tadokoro Bakery Tadokoro Special Burger with you. 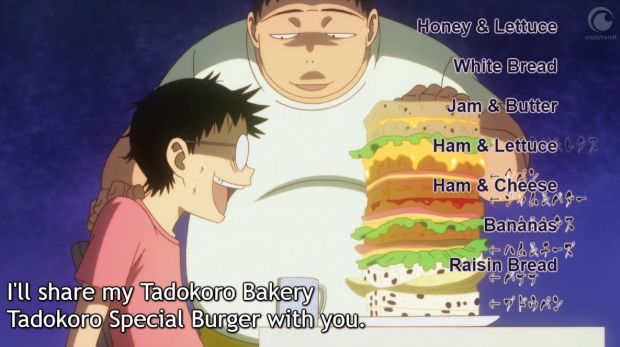 [A Tadokoro Bakery food truck had just been shown. I don't know if it is related to the character's family.]

In addition to the over-the-top (I assume) hilarity 😆, the word burger stood out. Is that a poor translation of the Japanese word for sandwich? Or maybe they are the same word in Japanese? (There is a long-running (since 1930) American comic strip named Blondie, and her husband is named Dagwood. Since he loves huge, multi-layered sandwiches such as these, they were known as Dagwood sandwiches. I'm not sure that term is still known generally, though.)

The scene takes place during the second day of their camp. Each team member must ride 1000 km over the course of four days. I realize they will be burning calories like crazy, but -- geez!

(This "answer" is technically a reply to a comment, but it includes a picture.)

But one certain thing, it's not a wordplay at all. – Aki Tanaka

I can accept that the word burger in itself may not be wordplay. That may well have snuck in due to the overlap in meaning between sandwich and hamburger. But let's compare the anime scene to the same panel from the manga by Wataru Watanabe: 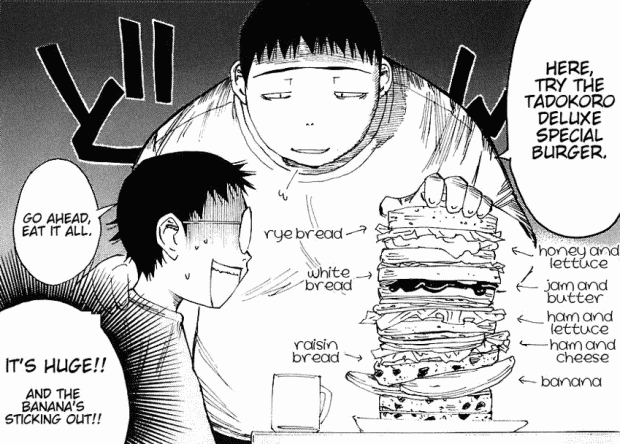 (acquired from this Wikia page; I love this panel because the rye bread is called out, as well as Onoda's final line, And the banana's sticking out!!)

Why did the anime add the extra complexity? I have listened to that part several times; My non-Japanese ears do not hear anything special, such as rhyme or tongue twister. If it were that, a commenter would have likely mentioned it. But I believe there is a reason the anime intentionally repeated "Tadokoro". The only reason I can think of for doing so is some sort of wordplay in those five words.

Theory (added 16:45 10feb17): There is subtle wordplay. It involves both Tadokoro and burger. Most Japanese are well aware that their pronunciation of the latter ("baagaa") lacks the r sound from the original English. Yet here is a guy whose surname actually contains an r sound -- I can hear it in the anime. The two Tadokoros supply the rs missing from baagaa. ... I'm not saying this theory is likely or even broadly funny, but it is what my subconscious came up with. It is a subtle joke of the ear, mind, and context, which may be why the animators could add it to a scene which was already really funny.

I don't know the creators' intentions, so it may be have been a mistranslation. But two of the claimants of the invention of a hamburger served the patty between two slices of bread. In the last hundred years, the meaning of "burger" may have changed to exclude preparations made with sliced bread, except for the fact that the descendants of one of the original inventors still serve it that way, and still call it a "burger".

The birthplace of the hamburger sandwich, Louis’ Lunch is a family-owned restaurant located in the heart of New Haven, CT. Currently run by the 4th generation, our restaurant has been satisfying customers’ hearty appetites since 1895. We have served customers from across the U.S. and are proud to be recognized by The Travel Channel, The Food Network, and many other television and print organizations.

Louis’ Lunch is committed to serving a classic hamburger that is hand-rolled from a proprietary blend of five cuts of meat, ground fresh daily. All of our burgers are cooked to order in the original cast-iron grills dating back to 1898. We want you to experience the meat’s true flavor, so we serve it on white toast with only cheese, onion, and tomato as garnishes. [emphasis mine]

In conclusion, their usage of the word "burger" may get them funny looks by most people. But historically, people may not have found their usage odd. And there are still people around who would serve (and accept) sliced bread for burgers.

Not the answer you're looking for? Browse other questions tagged japanese-language yowamushi-pedal or ask your own question.

8
The pun worked in English, but what was it in Japanese?