Does the "bloody nose" trope necessarily imply a sexual situation?

If you've seen much anime, you're familiar with the male character getting a bloody nose when he gets sexually excited. For example: 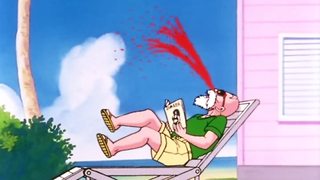 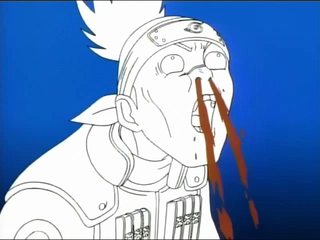 However, when I mentioned this to a Japanese person (someone who was not a big anime viewer), she was confused, and adamant that a bloody nose would normally just mean that the person was excited in general, and it would not necessarily have anything to do with sexual excitement.

This could (and seems likely to be) true for Japanese day to day real life, but very different in anime, where the connection to libido seems very clear.

Is there someone that can explain this difference? Is the "bloody nose" in anime just used to signify excitement, and it just happens to often (always) be sexual excitement because of the plot? Or is it supposed to be just understood how a bloody nose is interpreted in anime is different from normal life?

"So I asked a few Japanese and got a variety of pseudoscientific, and occasionally embarassed, explanations about humidity and blood pressure. But the best response I got was from one fellow who simply recounted that when he was a child he was told by his mother that if he stared at a pretty woman he would get a bloody nose."

The bloody nose gag exaggerates the rise in blood pressure when people are aroused, to such a degree that blood shoots out of the aroused character's nose.

As far as I know, it comes from embarrassment more than arousal. Note that it tends to not be perverts who get bloody noses (at least not when they're dealing with someone other than their primary love interest). Instead, it is the semi innocent/honorable hero/supporting character, the one who is not actively trying to look at a female's chest.

When presented with this kind of situation, all of a sudden, they tend to become quite embarrassed. This embarrassment normally leads to the face being filled with blood (blushing). BUT, to show an extreme case of this embarrassment, their nose bleeds instead from the excessive blood pressure buildup.

Male characters will develop a bloody nose around their female love interests (typically to indicate arousal, which is a play on an old wives' tale).

It has a reference in the end of this sentence that leads here.

I am not sure if these are reliable source, though...

In Japanese media, healthy young men that have no other sexual outlet will often suffer nosebleeds upon seeing the naked female body, or even just a pair of well-filled panties. It's probably a side effect of High Pressure Blood in a body that's Overdrawn at the Blood Bank.

And it is somehow a metaphor to this:

The nosebleed is, of course, a visual shorthand/euphemism for sexual arousal. It is commonly interpreted that way for males and females, with little trickles of blood indicating mild arousal, and gushing fountains of blood indicating erection/extreme arousal in both sexes. It can also be interpreted as shorthand strictly for erections in males. In that case, when blood shoots from the nose explosively, and in ridiculous quantity, the implication would be an ejaculation.

As explained on MedlinePlus Medical Encyclopedia:

Nosebleed can be caused by:

Repeated nosebleeds may be a symptom of another disease such as high blood pressure, a bleeding disorder, or a tumor of the nose or sinuses. Blood thinners, such as warfarin (Coumadin), clopidogrel (Plavix), or aspirin, may cause or worsen nosebleeds.

To answer your question, your Japanese acquaintance is right that in real life, a bloody nose would normally just mean that the person was excited in general, and it would not necessarily have anything to do with sexual excitement. In my experience, though, it's usually due to the causes listed in the bullet points, not due to high blood pressure. I would go with @ʞɹɐzǝɹ 's answer that it is a superstition/myth that is perpetuated in anime and manga, which this potentially NSFW video debunks (rather unscientifically) in a light-hearted manner. 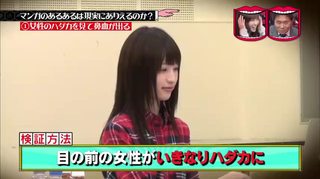 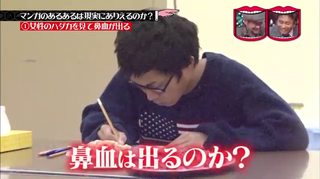 Screenshots from the video. The big captions read "Verification method: the woman in front will get naked without warning" and "Will the nosebleed come out?"

No actual proof here, but...

I would suspect that the anime writers just use bloody noses when they think it is funny, not taking actual Japanese beliefs or day-to-day customs into account.

It is way more funny when heroes get bloody noses when they get an accidental look than when perverts get a look (all the time).

On the other hand it is also funny when a pervert gets a bloody nose all the time (in extremes). As already mentioned, Jiraiya is an example of this. Sanji is even a better example as his bloody nose becomes life threatening at a certain point!

It's possible that the response of the 'Japanese person' in one of the above comments, that it's a sign of excitement in general, is probably correct. In 'Black Clover,' the character Gauche Adlai exhibits the characteristic anime nosebleed over a little girl, Marie - but she is merely his sister, whom he worships, and nothing more.

0
Use of nosebleeds to denote arousal?
12
Origins of the nose-bleed in anime/manga
1
What is happening to Nasa here when Tsukasa does something adorable?