What is the purpose of the watermelon in the ritual at the beach?

In the Zero no Tsukaima: Princesses no Rondo beach vacation OVA, the girls are told to perform an offering ritual to the Spirit of Water, using a watermelon. 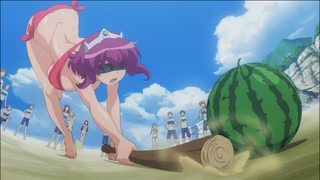 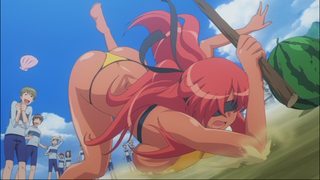 The "ritual" later turns out to be some sort of game set up by Saito and the other boys. However, why did they choose a watermelon for it? Does it symbolize something specific?

tropes the-familiar-of-zero
Share
Improve this question
edited May 27 '13 at 21:23

This is just a game of watermelon splitting (スイカ割り). In anime and manga, it is common activity portrayed in the beach chapters. Generally, the game is also played at the beach in real life, but it may also be played in nursery/kindergarten/playground or at event venue.

The rules of the game is quite similar to piñata: the watermelon is laid out, and the participants will try to smash it open while blindfolded.

The 2 paragraph above are summarized from Wikipedia page, both English and Japanese version.

There is no significant symbolization here. It is just a game in Japan introduced by Saito to the denizen of Halkeginia. By using the reason "for the sake of the Spirits of Water", the principal (+ Saito) fools the girls to change into bikini from one-piece swimsuit. And since the game is played blindfolded, the boys can ogle at the girls body all they want without triggering the girls self-consciousness.

Not the answer you're looking for? Browse other questions tagged tropes the-familiar-of-zero or ask your own question.

77
What is the purpose of characters shouting out the name of their attack?
9
What does the “teehee” expression mean?
43
What is the purpose served by cicadas in anime?
4
What is purpose of these arm band?
4
What happened to the Ring of Andvari?
21
Why do almost all anime series have a “going to the beach” episode?
12
What are the characteristics of a “tsundere”?
3
Can someone tell me what this song from episode 38 of Zero no Tsukaima is?
10
What is the technical term for the “consecutive, discrete zoom-in shots” and what is its origin?