In the anime continuity, is there any parallel to Lulu's mistake with the King of Ginko's castle?

In episode 8, we learn that Yuriika was rescued, as an "unwanted bear", by someone who is only referred to with male pronouns. 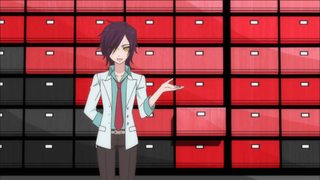 This person visually reminded me of Ginko's mother in the Yuri Kuma Arashi manga, which, compared to the anime, approaches the plot and characters differently. (See the right panel.) In the manga, Yuriika also has a significant relationship to Ginko's mother. They first meet at the school, after Ginko's mother has become engaged to Yuriika's brother, and they later become lovers. 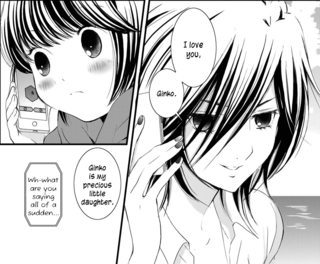 In the manga, Lulu speaks of Ginko living in a castle with a "King" and "Queen". The "King" is revealed to be Ginko's mother, rather than her father. We learn that Lulu was mistaken because someone referred to Ginko's mother with male pronouns — 彼 (kare), I believe — at some point. Lulu had this misunderstanding because Ginko's mother is named Kale, after the Greek goddess, which is pronounced similar to 彼 in Japanese.

Is there any parallel to this revelation of the "King's" actual gender in the continuity of the YKA anime? One wiki lists a woman as the voice actor for "Him", but that's not much to go upon.

Browse other questions tagged yuri-kuma-arashi or ask your own question.